Accord­ing to source­s, the premie­r said that taxpay­ers’ money will be recove­red from the former rulers­
By Rizwan Ghilzai
Published: July 25, 2019
Tweet Email 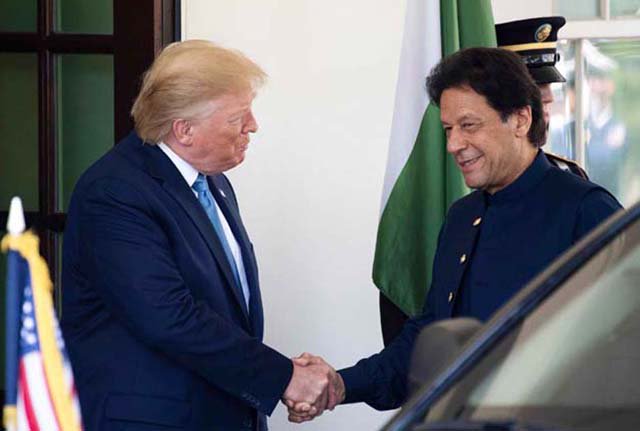 ISLAMABAD: Prime Minister Imran Khan has declared that United States President Donald Trump would soon visit Pakistan and that his is visit to Washington had been uniquely successful.

Addressing the federal cabinet on Thursday, the premier said that Pakistan had been able to present itself on equal terms with Washington.

PM Imran said that the issue of Kashmir was highlighted to the fullest and Pak-US relations would be on its best in the near future.

According to a document available with The Express Tribune, former PM Gillani spent more than Rs570 million on his 48 foreign visits during his four-year tenure. During this period, 2,067 people travelled with him.

Ex-prime minister Raja Pervaiz Ashraf made nine foreign visits during his one year in the office and spent more than Rs100m. He gave away Rs4.7 in tips and Rs9.2m rupees on TA/DA.

According to sources, the premier said that taxpayers’ money will be recovered from the former rulers.

Meanwhile, the federal cabinet withdrew the administrative powers of five regulatory authorities from relevant ministries and assigned them to the cabinet division.

The cabinet also approved the removal of column of profession from the passport and ratified the appointment of finance ministry additional secretary for expenses as secretary of the loans investigation commission.

The cabinet also sanctioned the decisions made by Economic Coordination Committee in its July 17 meeting, while approving extension of another four months in the eighth wage board award for journalists.

The cabinet was given a detailed briefing on Pakistan Post and was told that the department had initiated new projects and its staff was being trained and modern facilities being provided to improve the quality of services.

Federal minister Murad Saeed said that the deficit of Pakistan Post will be met by the end of current year.

The prime minister and the cabinet hailed the performance of the minster, employees and officers of Pakistan Post.