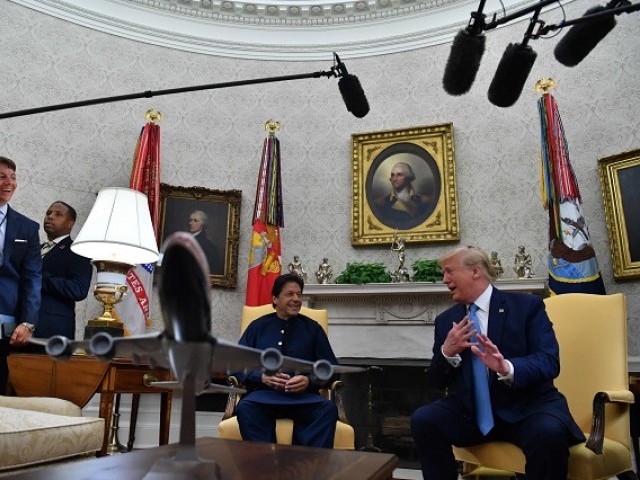 The invitation was extended during the prime minister’s meeting with Trump on Monday – the first summit-level engagement between the two countries since 2015.

President Trump welcomed the premier at the entrance of the White House. The two leaders jointly addressed the press and later had a one-on-one meeting, which was followed by delegation-level talks between the two sides.

The two leaders held comprehensive discussions with a focus on building a broad-based and enduring partnership between Pakistan and the United States and strengthening cooperation between the two countries to bring peace, stability and economic prosperity in South Asia.

The two leaders reviewed the progress of the Afghan peace and reconciliation process. President Trump appreciated Pakistan’s contribution to the peace talks and Prime Minister Imran reaffirmed Pakistan’s commitment to continue to support the process in good faith. He also added that pursuing the process was a shared responsibility.

The two also affirmed their resolve to work together across a broad range of areas and acknowledged the immense opportunity and potential for mutually beneficial collaboration in diverse fields such as trade, investment, energy, economic connectivity, and defense and security cooperation. Prime Minister Imran also invited the US corporate sector to invest in Pakistan.

It was decided to establish a mechanism to follow-up on the understandings reached.

The prime minister also briefed the US president about his vision of the socio-economic development of Pakistan. He said that “peaceful neighborhood” was a priority of Pakistan’s foreign policy, adding that peace and stability in the region would allow Pakistan to harness its human resource potential to generate growth and spur regional connectivity.

The Prime Minister said Pakistan was convinced that normalisation of relations with India would be mutually beneficial for the two countries. He underlined that Pakistan would continue to pursue dialogue and diplomacy to resolve longstanding disputes, including the core dispute of Jammu and Kashmir. President Trump expressed his readiness to play a facilitating role in resolution of the Kashmir dispute.

Following the conclusion of official talks, President Trump took Prime Minister Khan and members of the delegation on a tour of the White House.