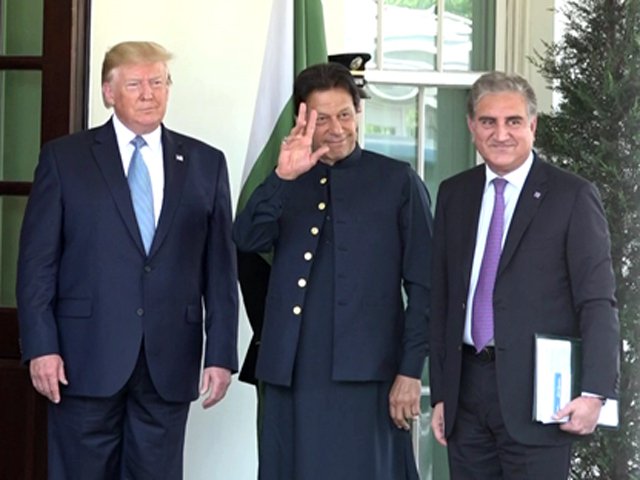 ISLAMABAD: Who would have thought that US President Donald Trump would receive Prime Minister Imran Khan at the White House on Monday given that not long ago the two leaders had a Twitter spat?

Such was the transformation that Trump not only greeted Imran but also praised his leadership as well as called Pakistanis “brilliant people”.

From Pakistan’s perspective, the takeaway from the Trump-Imran summit was no doubt US president’s unprecedented statement offering to mediate between Pakistan and India on the longstanding Kashmir dispute.

His offer was a clear departure from United States’ long-held position that the Kashmir issue was a bilateral dispute between the two nuclear-tipped neighbours and only they could find a best solution.

Throwback to the time Imran and Trump had a Twitter spat

However, people have a short memory because this was not the first time Trump offered to mediate between Pakistan and India. In fact, during election campaign, he did express his desire to play a role in defusing tensions between the two South Asian neighbours.

Nevertheless, what was surprising was his claim that even Indian Prime Minister Narendra Modi requested him to play a role in the resolution of the Kashmir dispute.

Indian media was reacting angrily to Trump’s remarks as New Delhi has always opposed the idea of third-party mediation on Kashmir dispute.

As expected, the Indian government was quick to reject Trump’s statement. The Indian Ministry of External Affairs spokesperson insisted that Modi had never made any request for mediation to Trump. “It has been India’s consistent position that all outstanding issues with Pakistan are discussed only bilaterally. Any engagement with Pakistan would require an end to cross-border terrorism. The Shimla Agreement and the Lahore Declaration provide the basis to resolve all issues between India and Pakistan bilaterally,” the spokesperson contended.

While US president’s remarks may have drawn international attention towards the Kashmir issue, observers and analysts caution Pakistan to treat the statement carefully.

Trump is known for making catchy and often off-script statements. There is a possibility that White House and the State Department would clarify his certain remarks on Kashmir.

In pictures: Imran-Trump meeting at the White House

“I am not overly excited over Trump’s offer,” commented defence analyst Lt Gen (retd) Amjad Shoaib. “His statement on Kashmir doesn’t mean US will change its larger strategic approach.”

He recalled that former US president George Bush made a similar offer after the 9/11 attacks because at the time he needed Pakistan’s support in the fight against terrorism.

Then military ruler Gen (retd) Pervez Musharraf, according to Gen Shoaib, not only agreed to a long-term ceasefire along the Line of Control but also launched a crackdown against militant outfits fighting in Kashmir.

“Musharraf fulfilled his commitment but Bush later went back on his assurance on Kashmir,” he added.

The worry is that President Trump may quickly change his approach if Pakistan fails to meet the US expectations regarding the Afghan peace process.

The US wants Pakistan to press Afghan Taliban (a) for permanent ceasefire (b) for intra-Afghan dialogue.

Gen Shoaib believes that it is impossible for Pakistan to deliver on these two demands for the simple reasons that Islamabad has now very limited influence over the Afghan Taliban.

Former ambassador Abdul Basit endorsed his assessment. “It is a slippery slope. I believe Pakistan cannot give blank assurance to the US over the success of Afghan peace talks,” Basit emphasised.

Another aspect that is going to ultimately determine the success of Imran’s visit will be the role of the American bureaucracy.

There were murmurs that the State Department was not so keen in extending invitation to the Pakistani prime minister unless there was tangible progress on Afghanistan.

Given the American bureaucracy’s approach, analysts are of the view that follow-up meetings of the Trump-Imran summit would determine if the positive sentiments expressed by the US president would translate into the resetting of bilateral ties.