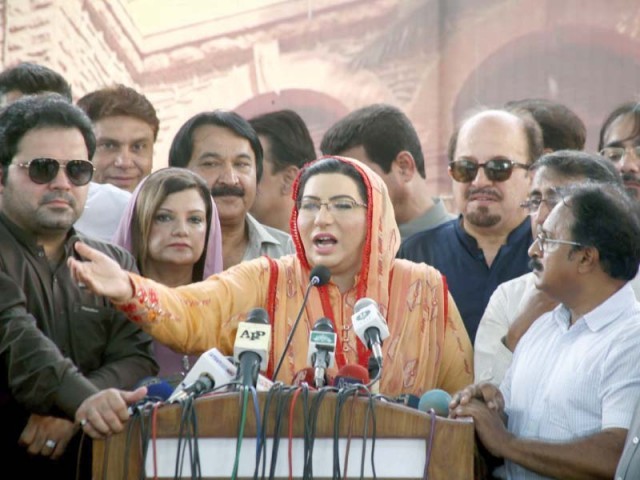 Dr Firdous Ashiq Awan assured people that the prime minister’s visit to the USA will improve the country’s ‘soft image’ while speaking at the Karachi Press Club. PHOTO: PPI

KARACHI: Dr Firdous Ashiq Awan, the special assistant to the prime minister on information and broadcasting, has said that Prime Minister Imran Khan will effectively advocate the case of Pakistan during his meeting with US President Donald Trump.

Speaking to media at the Karachi Press Club on Monday, Awan said that Imran Khan had gone to US to explain the “soft image” of Pakistan and redress misconceptions.  “This meeting will have a great impact on this region,” she told journalists, after meeting the KPC’s governing body members. “In this region, some elements want to isolate Pakistan, but their nefarious designs will not succeed,” she remarked.

“Democracy has breathed its last in Sindh and it is perishing after being afflicted with Aids. Today the public is deprived of clean drinking water and the PTI will strengthen the masses with democracy,” she said.

The information adviser lashed out at the Pakistan Peoples Party, saying that Bilawal Zardari was Bhutto without any reason. She maintained that the overseas Pakistanis had rejected the anti-Pakistan narrative.

Referring to a community event addressed by PM Khan in Washington, she said that those who were hatching conspiracies against PTI would be frustrated with the huge crowd of thousands of Pakistani diaspora in USA. “This shows how PTI is popular internationally and how overseas Pakistanis love their leader,” said Awan.

She was of the view that US President Trump has a particular approach about Pakistan, but after his meeting with Imran Khan, the former would be able to understand how 75,000 Pakistanis have sacrificed their lives in the war against terrorism.

Talking about the issues confronted by the media in Pakistan, the information assistant said that the federal government was serious about resolving the issues faced by journalists in light of Prime Minister Imran Khan’s directives.

Responding to a question about the opposition parties’ decision to observe a black day on July 25, she said, “People of Pakistan will not observe this day against accountability. You will see who participates in their programme. I hope their event fails to attack the people who are happy in naya Pakistan.”

Earlier, Awan, who was also flanked by PTI Karachi division leaders, expressed dismay and condemned the assault on Karachi Press Club President Imtiaz Faran by a PTI leader a few weeks ago. She added that the incident did not reflect the mindset of the PTI or the vision of Imran Khan and neither did the PTI encourage such steps. Awan apologised for the incident along with Opposition Leader in the Sindh Assembly Firdous Shamim Naqvi and the team, saying that the journalist organisations have always played the role of a front line institute of defending the interests of Pakistan and such behaviour cannot be encouraged.

“The KPC greeted me and my team so well that it felt like I had come home. The issues of media workers were identified after detailed discussions with journalist organisations,” she said.

“Karachi is the economic hub of Pakistan and the media is playing a decisive role in keeping it strong and stable. I have come here to give it support in all forms and provide all facilities,” said Awan, adding that all the rights and facts linked with the issues and media owners will be resolved.

All set for showdown in Ghotki by-poll today