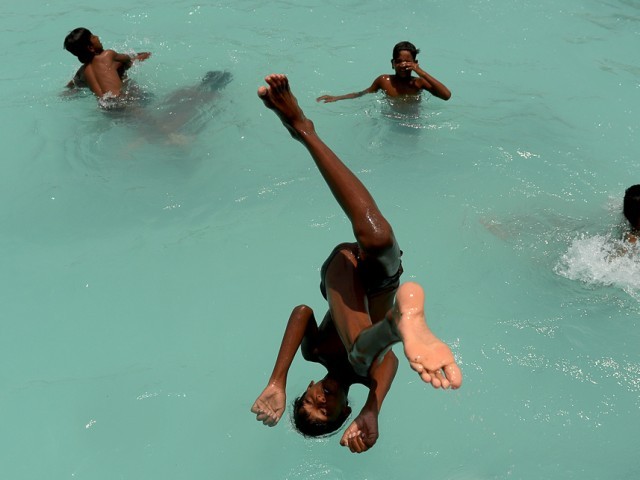 Many lives are lost due to people’s ignorance and callousness. PHOTO: AFP

BHAKKAR: With the temperature showing no signs of dropping, locals can be spotted thronging to swimming pools and canals. However, what initially starts off as a recreational activity can rapidly transform into a nightmare if proper safety measures are not taken.

Many youngsters typically dive into canals headfirst without any regard for their safety. Many lives are lost due to people’s ignorance and callousness.

Standard practices dictate that there should always be a life jacket and a buoy on standby at any body of water where a large number of people have gathered. Moreover, those who do not know how to swim should stay towards the shallow end of the pool to avoid any mishap.

Rescue 1122 Bhakkar Media Coordinator Bilal Hussain Panwar says that those who do not know how to swim should not venture into the water unless they are wearing life jackets. “A life jacket is often the difference between life and death,” he highlights.

Commenting on the trend of bathing in canals, he maintains that it is crucial to always have a buoy around. The buoy can be tied to the edge of the canal and can prevent locals from drowning, he says.

He reveals that majority of drowning incidents reported in the district have occurred due to locals failing to take proper safety measures. “The monsoon season is upon us, which means that the branches of trees, which are lining the canals, break off and fall into the water,” he says.

These branches cannot be seen by the naked eye as they remain cloaked underwater. However, when people dive into the canals, their clothes and limbs can sometimes become entangled in these branches, pulling them back down every time they try to surface.

The difficulty in breathing, coupled with the panic of being in such a situation, can eventually cause them to fall unconscious and even die, he says.

However, if one is wearing a life jacket, it can easily bring the individual to the surface, saving their life in the process, he adds. He also advises novice swimmers and those who do not know how to swim to avoid going into deep water.

“Rescue teams are always on standby to respond to any emergency call. However, it is up to the people to take safety measures and precautions, which can end up saving their lives and the lives of others,” he explains.