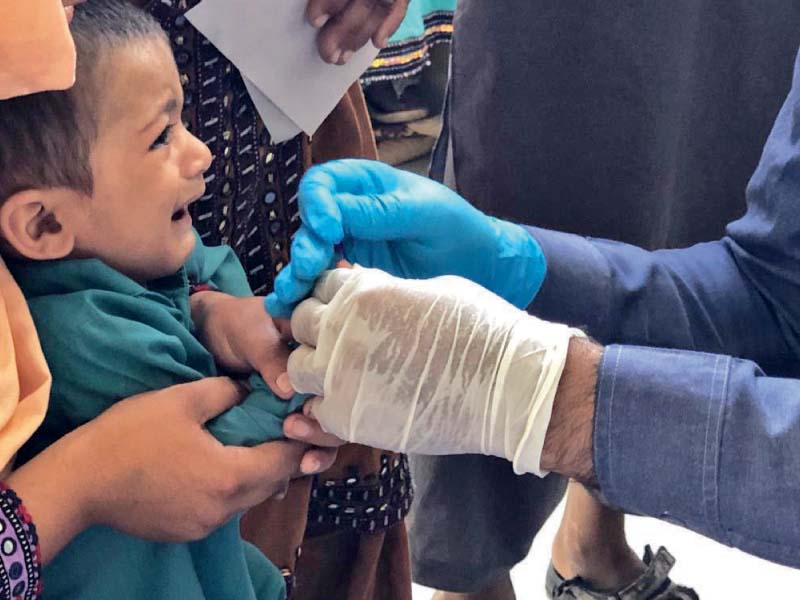 A child is tested for HIV using the Alere strip at the Rato Dero Taluka Hospital. Thousands of people have been screened over the last month after cases of HIV surfaced among children. PHOTO: FILE

KARACHI / LARKANA: Roughly three months have elapsed since the HIV outbreak in Rato Dero was first reported but many of those who contracted the virus, due to the criminally negligent actions of one doctor, have yet to receive the drugs they need for the rest of their life.

With the number of those infected by the incurable virus now as high as 936, the families of the victims, most of whom are children, are livid that health facilities in Larkana are still unable to provide antiretroviral therapy (ART) which HIV patients need in order to survive.

“It has been almost three months since we learnt my two-year-old daughter is HIV-positive, but the doctors at the pediatric centre in Larkana are still telling us to wait,” complained Rato Dero resident Gulbahar Shaikh. “They say the antiretroviral drugs she needs still have not reached Pakistan from Ethiopia.”

“Already, my daughter is showing signs of fevers and other symptoms,” an alarmed Gulbahar told The Express Tribune. “We seriously fear for her life.”

If local media reports are to be believed, as many as 22 HIV-positive children have already died in the last two and a half months. One of them, Aisha, died three weeks ago after being diagnosed with HIV in May. She was not the only one in her family to contract the deadly virus.

“Four children in our family are HIV-positive,” said Aisha’s uncle, Asadullah Soomro. “Two of them are my children and the other two are my younger brother’s.” Asadullah said he and other members of his family have been visiting the ART centre in Larkana regularly since the day their children were diagnosed with the virus. 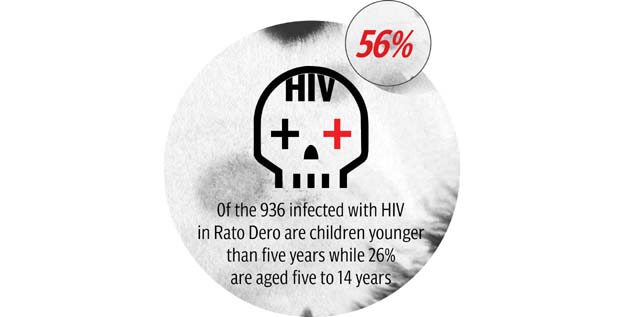 “Instead of giving us the antiretroviral medicines our children need, they just gave us some syrup and vitamin tablets,” he lamented. “My niece Aisha would be alive today if only she received the treatment she needed.”

Zulfikar Jalbani, another Rato Dero resident, whose five-year-old son has been diagnosed HIV-positive, narrated a similar experience. “Every day we go to Larkana and all we are given are Septra DS and Velosef antibiotics. No one tells us when the antiretroviral drugs will be available,” he protested.

The families of Rato Dero’s HIV-positive minors are also fed up with the 30-kilometre commute to Larkana they have to undertake daily. “It is fruitless,” said Gulbahar. “We travel to Larkana again and again because there is no proper HIV facility in Rato Dero. Each test takes five to six days and for what? Just so the doctors can tell us to wait for the medicines to arrive.”

“Despite official promises, no one is counselling or guiding HIV victims and their families at the local level,” said local journalist Jamal Dawoodpoto. “Only trainee doctors have been deputed to conduct screening tests. There is no attempt to organise a campaign to raise awareness about this incurable virus.”

Dr Sikandar Memon, who heads the Sindh health department’s HIV/AIDS Control Programme, challenged the complaints of ART unavailability. He also stressed that the reports of deaths of 22 HIV-positive minors were ‘unconfirmed’.

“We have registered 648 of the 770 children who contracted HIV in Rato Dero and 428 of them are already receiving ART,” said Dr Memon. “Among adults, 124 have been registered and six are being provided antiretroviral drugs with the help of the Global Fund to Fight HIV/AIDS.”

Explaining why some of the HIV patients were not on antiretroviral drugs yet and being prescribed other medicines, he said, “Many of the HIV-positive children brought for ART had various other diseases like diarrhoea, tuberculosis etc.”

WHO team to visit Pakistan this month over HIV outbreak

“Before we can start them on HIV medication, we have to cure the other diseases they are suffering from,” HIV programme head told The Express Tribune. He also pointed out that 122 children initially diagnosed with virus are also missing from the HIV programme database. “We have assigned the task of tracing them to lady health workers.”

Regarding the lack of HIV facilities in Rato Dero, Dr Memon admitted that no proper setup has been arranged even though the government announced it would establish an HIV treatment centre and laboratory in the town. However, he said that these facilities would soon be set up with the help of Agha Khan Hospital.

“In the meantime, we have set up an HIV treatment centre at the Shaikh Sayed Children Hospital in Larkana,” Dr Memon added.