50 years ago, humanity's first steps on another world

50 years ago, humanity's first steps on another world 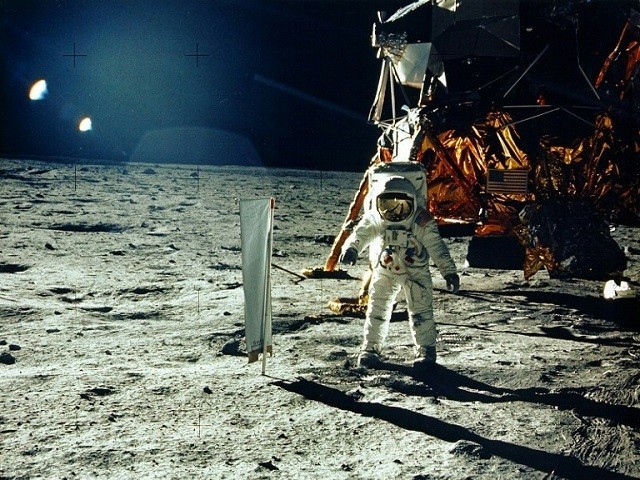 WASHINGTON: Fifty years ago on Saturday, American astronauts Neil Armstrong and Buzz Aldrin became the first humans in history to set foot on the Moon, an event watched on television by half a billion people.

A little over six hours later, at 0256 GMT, Armstrong placed his left foot on the lunar surface, declaring: “That’s one small step for man, one giant leap for mankind.” 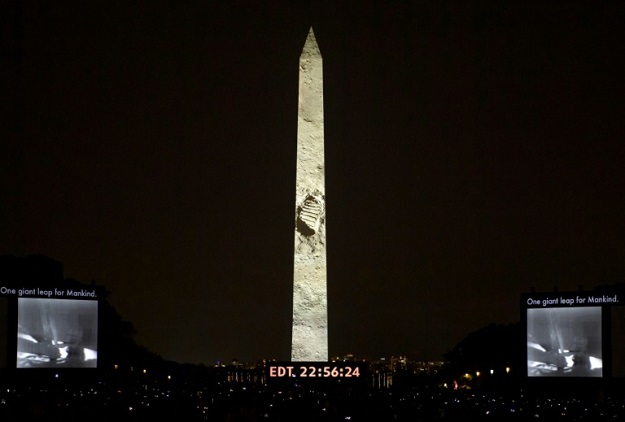 The “Apollo 50: Go for the Moon” show, combining full-motion projection mapping artwork on the Washington Monument and archival footage to recreate the mission. PHOTO: AFP

‘The world was watching’: US commemorates Apollo mission 50 years on

NASA has been in overdrive for several weeks to mark the anniversary, with exhibits and events nationwide but most notably at the Kennedy Space Center in Cape Canaveral, Florida and the Johnson Space Center in Houston, Texas.

On Saturday, Vice President Mike Pence is due to deliver a speech from the Kennedy Space Center, from where Armstrong, Aldrin and Michael Collins, the third crew member took off. All three men were born in 1930.

Pence sent shockwaves through the industry in his last major space speech in March, when he advanced the deadline to return humans to the Moon by four years, from 2028 to 2024. 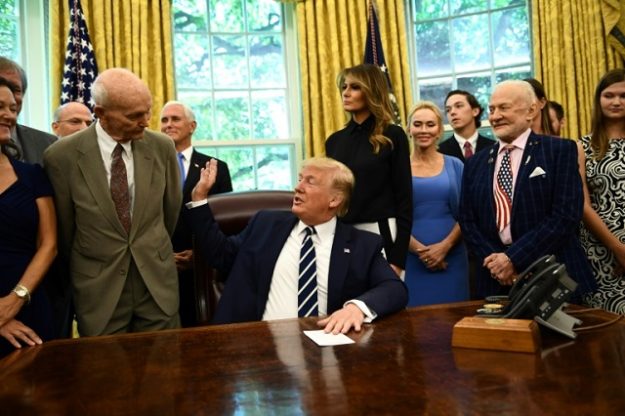 It is within this charged context, with President Donald Trump publicly questioning NASA’s plans to return to the Moon to test technology for Mars, that the US is celebrating the anniversary of the epoch-making Apollo 11 mission.

Collins, 88, has remained the more active of the surviving Apollo veterans, and frequently shares lyrical recollections of the mission.

Speaking at a Washington event on Thursday, he said that while the Moon itself was breathtaking seen up close, it was the view of Earth that has stayed with him and shaped his perspective.

“When we rolled out and looked at (the Moon), oh, it was an awesome sphere,” he said.

“The Sun was behind it, so it was illuminated by a rim of gold which made the strangest appearances of the craters and crater pits, the contrast between the whiter than white and darker than dark.”

As magnificent as that view was, it was “nothing compared to this other window out there,” Collins continued.

“Out there was this little pea about the size of your thumbnail at arm’s length: blue, white, very shiny, you get the blue of the oceans, white of the clouds, streaks of rust we call continents, such a beautiful gorgeous tiny thing, nestled into this black velvet of the rest of the universe.”

While Neil Armstrong and Buzz Aldrin were on the surface, ex-fighter pilot Collins remained in lunar orbit where he was in touch with ground control, providing them updates on his position.

“I said to Mission control, ‘Hey, Houston, I’ve got the world in my window.’ 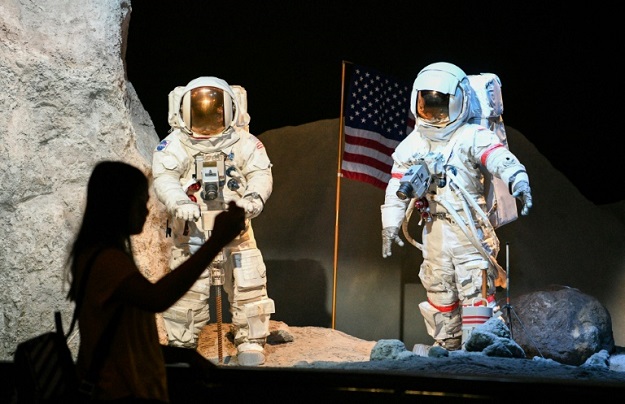 A visitor looks at a lunar landscape exhibit during the Apollo 11, 50th Live celebration at Space Center Houston in Houston, Texas. PHOTO: AFP

By placing men on the Moon, the US achieved the ultimate victory in the Space Race after losing the initial heats to the Soviet Union, which was first to put a satellite and then a man in space.

How conspiracy theories followed man to the Moon

The undertaking, announced by President John F Kennedy in 1961 and partly spurred by the Bay of Pigs crisis, involved enormous spending rivalled in scope only by the construction of the Panama Canal and the Manhattan Project.

It was a resounding achievement not just from a technical perspective but also diplomatic, as the two superpowers jostled for global prestige in the Cold War.

Trump has re-launched the race to re-conquer the Moon — this time with the first woman — and to journey onwards to the Red Planet.

But the deadlines — 2024 and 2033 respectively — appear unrealistic and have caused turbulence within the space agency.