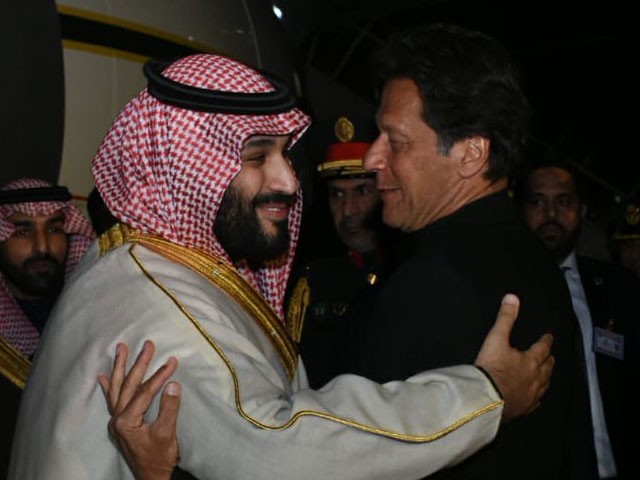 ISLAMABAD: Prime Minister Imran Khan is set to embark on an official visit to the United States on Saturday — made possible by the role played by Saudi Crown Prince Mohammed bin Salman — aiming to mend strained relations and attract much-needed investment for the country.

The prime minister is undertaking the maiden trip to Washington on the invitation of US President Donald Trump.

He will be accompanied by Chief of the Army Staff (COAS) Gen Qamar Javed Bajwa, meaning the discussions would be wide-ranging.

Analysts believe he will play a key role in discussions away from the media glare where much of the serious business of the visit will take place, with the military looking to persuade Washington to restore aid and cooperation.

When Imran walks into the White House and meets Trump on July 22 that would be culmination of hectic behind-the-scene diplomatic efforts spanning many months for arranging the summit.

According to officials with direct knowledge of the efforts, Saudi Crown Prince Mohammed bin Salman used his personal contacts with Trump’s son-in-law Jared Kushner to arrange the invitation for the prime minister to the White House.

Kushner is also a senior adviser to Trump.

Efforts to arrange the prime minister’s trip to the US began in December last year after Trump wrote a letter to Imran, seeking his help in facilitating the Afghan peace process.

An official, who is familiar with the development, told The Express Tribune that the prime minister was keen to have a face-to-face interaction with Trump because he was of the view that “such a meeting would help dispel many misperceptions the US president may have about Pakistan and its role in the region”.

But given the apparent tensions in relations and deepening trust deficit between the two countries, it was not possible to convince the American establishment for the Trump-Imran summit.

The only possibility was if Pakistan could bypass the US bureaucracy and made a direct contact with Trump.

“That’s when the idea of using unconventional channel came,” revealed the official, who requested not to be named since he was not authorised to speak to the media.

Pakistan then decided to approach the Saudi crown prince knowing his ‘close contacts’ with Kushner.

Since assuming his office, Prime Minister Imran held several meetings with the Saudi crown prince in short span, something that helped him develop personal relationship with the future Saudi king.

Sources confirmed that the Saudi crown prince used his ‘good offices’ to convince Trump through his son-in-law for a meeting with the prime minister.

Another figure that complemented those unprecedented efforts was Republican Senator Lindsey Graham, who is considered close to Trump.

Graham visited Islamabad in January and was ‘highly impressed’ with the ‘vision’ of Prime Minister Imran for Afghanistan and the region.

Graham believes Trump and Imran had ‘similar personalities’ and they would surely go along well with each other.

“If President Trump ever met Prime Minister Imran and he listen to what I have listen today, I think he will be far more enthusiastic about the region than he is today,” the influential Republican had told reporters after meeting Imran.

The sources said Foreign Minister Shah Mehmood Qureshi stayed in touch with Senator Graham, who made personnel request to Trump for extending an invitation to the prime minister.

The idea behind pushing for Imran-Trump summit was to have ‘candid and open’ discussions on some of the pressing issues facing both the countries and the region.

Officials familiar with the agenda of the prime minister’s visit said discussions would focus on bilateral ties and regional issues — including Afghanistan and beyond.

But unlike the previous visits, Prime Minister Imran may not necessarily stick to the ‘official brief’ on bilateral ties and other issues.

He is likely to share his own vision for the future of Pak-US ties as well as for the region with particular focus on Afghanistan.

Observers believe that given the unconventional nature of both leaders, it will be interesting to watch if Trump and Imran click together. If that happens, analysts say, things could turn for the positive.

Trump’s main concern is Afghanistan while Imran is looking at reviving bilateral ties with the US in a manner that helps Pakistan’s faltering economy.

Some officials claimed that the fact Imran was invited at the White House was an acknowledgement of Pakistan’s ‘positive role’ in facilitating the Afghan peace talks.

The visit is not only being watched closely by many Pakistanis back home but also in neighbouring India.

The officials said they were aware of the ‘influential’ Indian lobby in Washington and; hence, the preparation was made accordingly.

His arrest was welcomed by Trump, who claimed that it was possible after ‘great pressure’ exerted on Pakistan for last two years.

The arrest of Hafiz Saeed would help neutralise Indian propaganda that Pakistan was not going after all militant groups, officials maintained.