Differently-abled fan's sketch of Salman Khan will melt your heart

Differently-abled fan's sketch of Salman Khan will melt your heart

"Can’t recipr­ocate the love but prayer­s and much love", the actor wrote in an emotio­nal respon­se to the video
By Sarah Price
Published: July 17, 2019
Tweet Email 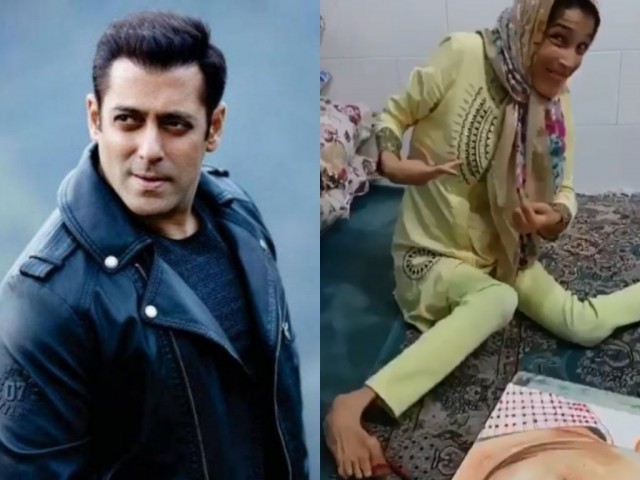 KARACHI: Amidst celebrity feuds and funny memes, Twitter occasionally shines a light on the beautiful side of humanity.  Yes, even when Salman Khan is involved.

A heart-warming video was shared recently, showing us that a fans love can know no boundaries as a portrait of Bollywood star Salman Khan was created.

But what makes the video so special is the woman behind the artwork.  The differently-abled fan painted the artwork with her feet, using a phone picture as her only guide.

Salman Khan is often regarded as the ‘King of Controversy’. Be it his latest run-in with the law regarding the alleged ‘hit and run’ incident or ‘hunting the chinkara’, bhaijaan has gone through it all.  But through it all, Salman’s fans have stood beside him like a strong pillar and this woman is no exception.

Life used to be black and white, now it is grey: Salman Khan

Needless to say, the Bharat star was touched by the woman’s display of affection, taking to Twitter to express his gratitude.

“God bless…Can’t reciprocate the love but prayers and much love,” Khan wrote in his tweet.

God bless… can’t reciprocate the love but prayers and much love !!! pic.twitter.com/lL5wmfVg7a

The star also shared the video of the woman on his Instagram, where Rocky legend Sylvester Stallone himself even replied to the emotional scene.  “That is love and devotion, Sly,” he commented.

God bless… can’t reciprocate the love but prayers and much love !!!

Seems like Khan is also getting very sentimental and philosophical these days, recently posting a black and white photo on the social media platform.  “Life used to be black-and-white, yes or no, truth or lies, it was crystal clear now perhaps it’s grey, it’s maybe.”

Life used to be black-and-white, yes or no, truth or lies, it was crystal clear now perhaps it’s grey, it’s maybe. Who the hell cares, is that true? Hope not for god’s sake. Long live morals nd principles and ethics.

Are we seeing less work-out posts and more of the deeper side of life from the Bollywood star? We hope so.

Even when we’re married, people won’t leave us alone: Iqra Aziz on her engagement