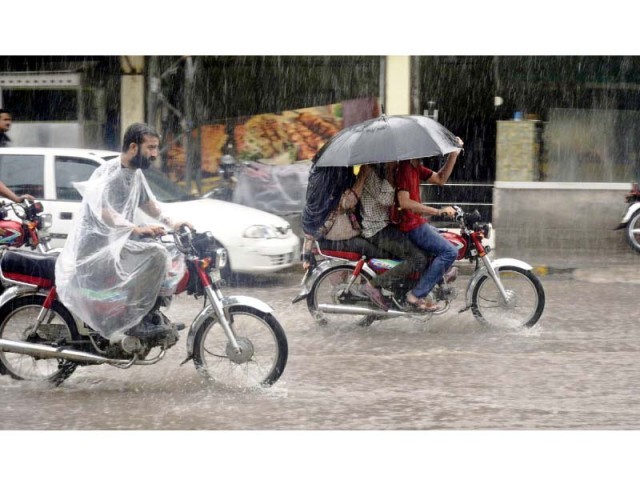 LAHORE: Heavy monsoon rain lashed the provincial metropolis and adjoining areas on Tuesday, resulting in the death of a minor and injuries to 11 others. The incessant rain lasted for several hours, causing water to accumulate in several areas of the provincial capital.

Routine life came to a grinding halt and traffic was severely affected, while power supply was disrupted to various parts of the city. Due to the ineffectiveness of the aging sewerage network, especially in low-lying areas, rainwater entered shops and houses, thus ruining valuables.

Six-year-old Arooj Fatima, the daughter of Muhammad Jamil, died after a roof collapsed over her family in Ladhar village. According to details obtained by The Express Tribune, the victims were inside their house when it caved in due to heavy rains. Arooj and her father were trapped under the debris, while rescue teams rushed to the scene. They removed the debris to find that the minor had passed away. The father was taken to the hospital.

WATCH: Buzdar comes to the aid of citizens stranded in Lahore rain

In another incident in Nishter Colony, a motorcycle collided with a car and seven people were injured as a result. They were all admitted to a nearby hospital for treatment.

Two more people were injured in another roof collapse in Township on PEPCO road. Another two people also suffered injuries when the roof of their dilapidated house collapsed in Badami Bagh. Incidents of fire on electric poles were also reported in Pakistan Chowk Ichra, Barkat Market and DHA-Phase 3. There was a fire in a backup power system at a house in Garden Town, while a car was damaged in Mochi Gate after the wall of a drain fell on it.

Speaking to The Express Tribune, local trader Bilal Khan complained that several hours of rain had converted his neighbourhood into a pond. Citizens were trying to pump rainwater out of their shops and houses, but no Water and Sanitation Agency (WASA) or local administration officials were available to lend a helping hand in this hour of need.

Another local, Muhammad Awais, highlighted that there was no electricity in his street for several hours. Residents lodged numerous complaints, but all in vain, he claimed. The power failure also created a water shortage in the area. 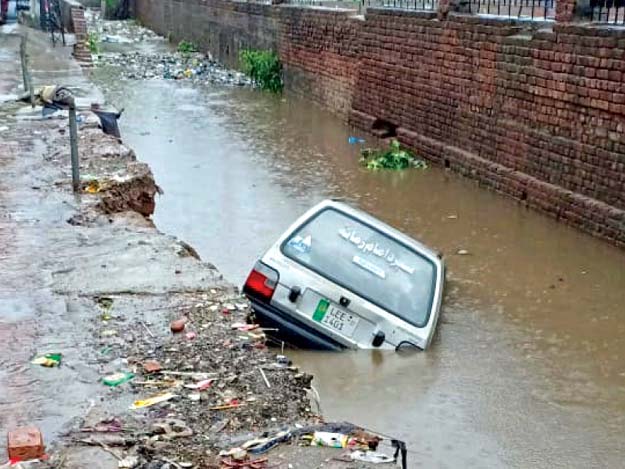 A visit to different localities showed that rainwater had gathered equally in both low-income neighbourhoods and posh localities, but WASA’s response towards different areas was discriminatory in nature. In posh areas, the agency had deployed water pumps to remove accumulated water, but an official could not be seen for miles in poorer neighbourhoods.

An official of the Lahore Electric Supply Company (LESCO) disclosed that over 150 feeders of power utility had tripped due to heavy rain. The company had declared an emergency and deployed special teams. However, he indicated that necessary works could only resume after the rain stopped as it could prove fatal for the line staff to work in these conditions.

Following heavy rain and water accumulation in several areas, Punjab Chief Minister Sardar Usman Buzdar ordered officials to take necessary action to disperse of rainwater from low-lying areas of Lahore and other cities of the province. He warned that he would not tolerate any negligence.

He also visited different areas of the provincial metropolis, including Shimla Pahari, Bohar Wala Chowk, Mall Road, Montgomery Road, Laxmi Chowk, and GPO Chowk. He offered lifts to women and children who were stuck in the rainwater and dropped them off at their destination.

A weather report issued by the Pakistan Meteorological Department (PMD) indicated seasonal low lies over north Balochistan and said its trough is extending Northeastwards. Moderate moist currents from Arabian Sea are penetrating the upper parts of the country.

It highlighted that rain-thundershower/windstorm with isolated heavy falls are expected at scattered places in Hazara, Rawalpindi, Gujranwala, Sargodha, Faisalabad, Lahore divisions, Islamabad and Kashmir as well as isolated places in Malakand, Peshawar, Kohat, Mardan, Bannu, Zhob, Multan and Sahiwal divisions. Hot and humid weather is expected elsewhere in the country.