Provin­cial inform­ation minist­er claims a ban is being introd­uced on marria­ges of girls under the age of 18
By News Desk
Published: July 16, 2019
Tweet Email 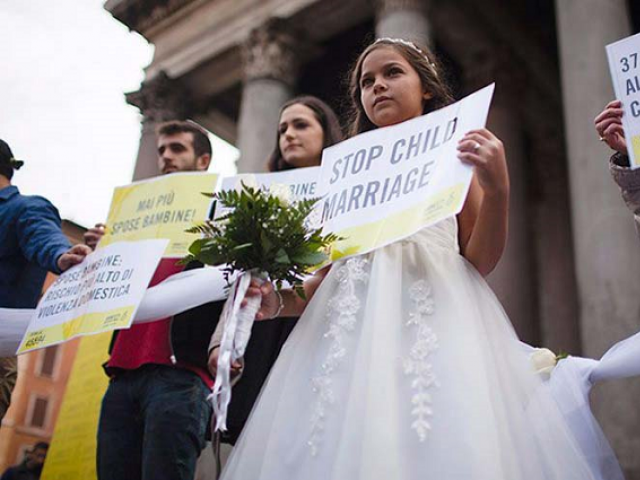 Provincial information minister claims a ban is being introduced on the marriages of girls under the age of 18. PHOTO: REUTERS/FILE

The government of Khyber-Pakhtunkhwa (K-P) on Tuesday decided to amend laws related to marriage and divorce for the minority Christian community, Express News reported.

K-P’s Minister for Information Shaukat Yousafzai made the announcement during a press conference after attending an Al-Khidmat Foundation event in Peshawar.

“A decision to form Mashaikh Council, at provincial and district levels, has been taken. In the budget, grants for marriages, students and widows have been allocated.”

“In the provincial cabinet, Christian Community Amendment Bill and Divorce Amendment Bill are being presented while a ban is being imposed on the marriages of girls under the age of 18,” said Yousafzai.

The minister claimed the K-P government was trying to give protection to women in divorce-related matters.

“In the past, a husband used to get rid of his wife easily after leveling allegations against her. But this will not happen anymore. The husband now will now have to prove the accusations through evidence,” Yousafzai explained.

Earlier in May, UN Women and Women Parliamentary Caucus (WPC) of the K-P Assembly had signed a Memorandum of Understanding (MoU) to advance women’s empowerment and gender equality agenda in the province.

Child marriage: The scourge of Khyber-Pakhtunkhwa

The UN Women and WPC vowed to make joint efforts for the promulgation and implementation of pro-women laws, with the first and foremost focus on awareness-raising and policy advocacy for legislation to end child marriages and women trafficking in K-P.