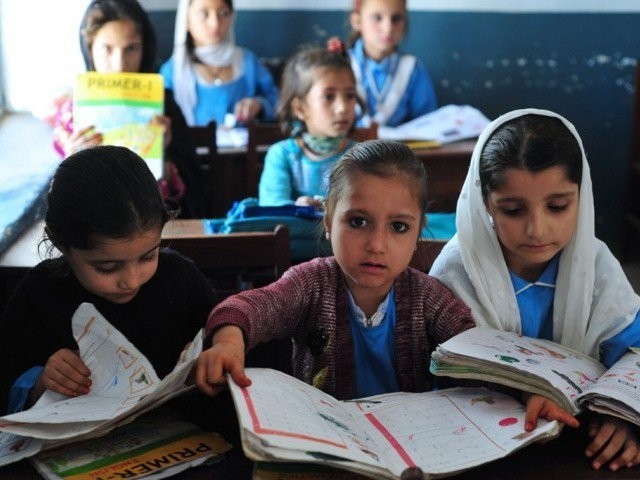 Millions of children in Pakistan are unable to read or learn despite years of schooling. PHOTO: FILE

KARACHI: It’s no secret that the educational system in Pakistan has always been in shambles. Despite the generous funding from foreign donors to transform the educational sector in the country and the tall claims of various governments regarding improvements, there are almost 23 million out-of-school children in Pakistan – the second highest number in the world.

What’s worse, however, is the sad reality that even those children — millions of them — who attend public schools end up learning nothing because the educational system is intrinsically flawed and in dire need of reform.

This was the key finding of a new report published by the Wilson Center’s Asia Programme. Titled “Why can’t Pakistani children read?” the report highlights the weaknesses of the Pakistani educational system and the reasons why schools are unable to impart skills necessary for reading and learning.

Researched and authored by Nadia Naviwala – a Wilson Center global fellow and former public policy fellow – the report is based on visits to about 100 Pakistani classrooms, discussions with government ministers, other senior officials, technical experts, and international donors; and interviews with teachers and students.

Pakistan has one of the largest externally-funded education reform programmes in the world and since 2001 the education budget has been going up by 18% every year. In fact, the education budget rivals the defence budget. Therefore, the poor quality of education and students’ inability to read and learn is a matter of great concern for donors as well as policymakers.

According to the report, despite being enrolled in schools, only less than half of third graders in Pakistan can read a sentence in Urdu or local languages primarily because of the use of foreign languages in education. As a result, students fail to comprehend their lessons, leading to a massive drop-out ratio.

Speaking at the launch ceremony of the report, Naviwala cited the example of a girls’ community school in the outskirts of Peshawar that she visited where only one student out of a total of 120 could read.

“[The kid who could read] came from a private school and he too reads stutteringly,” Naviwala said. “These kids speak Pushto and are not Urdu speakers. When they come to school, they learn to read and write in Urdu and English – which they don’t understand. Once they get to grade one, they have books in four languages – Urdu, English, Arabic and Pushto.”

Naviwala explained that the scripts of the languages being taught are also different, therefore, children resort to rote learning as they have no comprehension of any of the languages.

The style of teaching is also quite problematic as teachers merely make children repeat certain words to memorise them instead of telling them how to join letters together to form a word and read it. Therefore, schools are unable to impart the skills necessary for reading and learning.

The report also found that the pattern of illiteracy across schools in Pakistan was consistent. Even in places where governance was strong and the local government had introduced new educational reforms, together with better infrastructure and facilities, most children were still unable to read. Those who could read a little were unable to comprehend what they were reading.

The report also talks about English-medium schools and how the introduction of English is considered a way to move forward in terms of literacy in Pakistan.

Per the findings, however, the term “English medium” refers to the language of the textbook, but not instruction. Neither the majority of teachers nor students in Pakistan speak English.
“A survey by the British Council found that 94 per cent of teachers at English-medium private schools in Punjab did not speak English,” the report said.

“English-medium in these schools refers only to the language of the textbooks, and when handed books in a foreign language, teachers and student recite and copy text without comprehension, in the same way, that many Pakistanis learn to read Arabic in order to recite the Quran.”

Per the report, English-medium is intimately tied to rote learning and as long as books are in English, critical thinking and conceptual understanding are not possible.

The report also sheds light on other aspects of the educational system in Pakistan and, in the end, it also provides a list of solutions to address the problem.

“Pakistan needs dogged local leadership that prioritises education enough to understand it. This might not be forthcoming from political leaders, but it can come in response to a popular consensus amongst elites,” the report said.

“This is the only way to shatter Pakistan’s fossilised, white elephantine education system and replace it with a new and reformed model for education – one that finally enables children to read and learn, teachers to teach, and Pakistan to become a better educated and more prosperous place,” the report concluded.