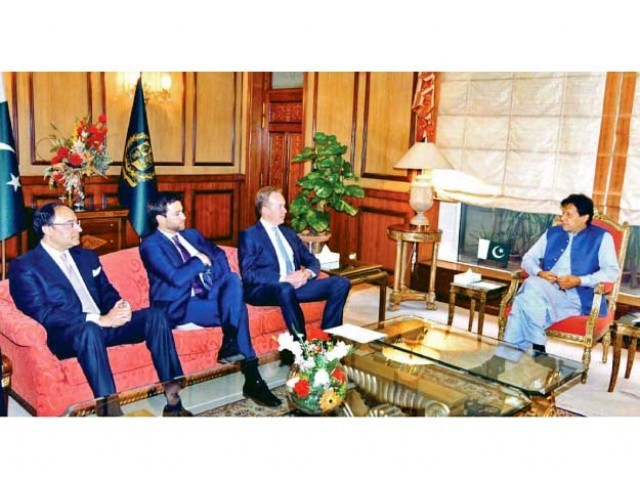 ISLAMABAD: Pakistan has largely addressed energy and security challenges during the past five years and it needs to be cautiously optimistic as the economy remains at a critical juncture, said World Economic Forum (WEF) President Borge Brende on Thursday.

It was Brende’s second visit to Pakistan during the last almost six years. Earlier, he had visited Pakistan in his capacity as foreign minister of Norway.

There were positive things happening in Pakistan’s economy, said Brende while speaking at a luncheon dialogue with public and private-sector representatives. Pathfinder Group Chairman Ikram Sehgal, on behalf of the strategic partnership between Pathfinder Group and Martin Dow Group, arranged the session.

During the past five years, Pakistan has addressed power blackouts and the security situation has also been addressed, which is also good for long-term investment, said Brende. He hoped that the Doha round of talks with Taliban will improve security situation in the region.

Pakistan’s economy is at a very critical juncture and agreement with IMF will address short-term and medium-term challenges, said the WEF president. But this will not necessarily address the structural issues, he added. Brende said Pakistan needs to be cautiously optimistic as it has to deliver on many counts.

He also emphasised the need for enhancing the tax base which, he said, was important to increase infrastructure spending.

He said the WEF would like to be a real partner of Pakistan in improving human capital skills, adding that 60% of Pakistan’s population was less than 30 years of age. The WEF supported the accelerator programme which will work with public and private sectors as well as civil society to improve human capital skills.

Similar programmes are also run in India, the UAE and Africa.

Brende said the private sector is 75% of GDP and no country can develop without private-sector partnership. The world is changing rapidly and emerging economies will be more than 50% of the global GDP for the first time this year, he added.

The current one-day visit of the WEF president to Pakistan is closely related to the efforts made over the past many years by Pakistani WEF members, said Sehgal. Sehgal has been arranging Pakistan breakfast at annual meetings of the WEF in Davos over the past 18 years. SBP Governor Dr Reza Baqir also spoke about economic challenges and the government’s strategy to deal with them.

“The biggest risk is domestic and that is cynicism and we all have to be optimistic and we should not fall prey to those who want to be cynical,” said the governor while striking many optimistic notes about the economic affairs.

“We should be optimistic about Pakistan’s future because momentum is on our side,” said Baqir.

However, a recent Gallup survey showed that overall sentiment in the country has become pessimistic with 57% of Pakistanis expressing the view that the direction of the country is not correct.

According to the Gallup Pakistan Political Weather Report, the Pakistan Tehreek-e-Insaf (PTI) government and Prime Minister Imran Khan face the aftermath of difficult budget for 2019-20, with Imran’s job approval rating dropping from 58% in April 2019 to 45% in this latest survey, a significant 13-percentage-point drop in two months.

He said the current account deficit, which was at an all-time high averaging $2 billion per month, was brought down to $1 billion.

Under the IMF programme, Pakistan has shifted to a market-determined exchange rate. The IMF report assumed an average exchange rate of Rs172.53 to a dollar for the current fiscal year.

“The published staff report on Pakistan includes exchange rate assumptions, which are not predictions,” said Teresa Daban, IMF Resident Representative, on Thursday. She added that under the IMF-supported programme, there is no agreed target level for the exchange rate, which is market determined.

The governor said the IMF agreement would bring an end to uncertainty and it helped to enhance credibility of Pakistan’s reform programme. It will also unlock cheaper financing, he added.