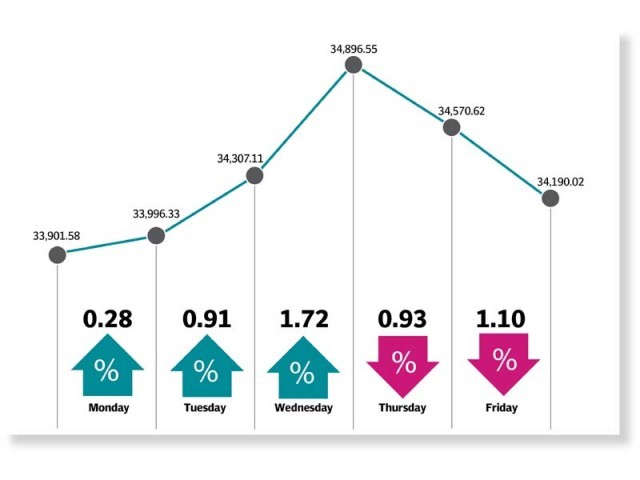 KARACHI: The stock market remained highly volatile and ended the week in the green, despite closing negative in two out of five trading sessions. As a result, it gained 0.9% or 288 points, pushing up the benchmark KSE-100 index to 34,190.

The week’s trading commenced on a positive note as investors rejoiced over the three-day extension in the tax amnesty scheme as well as approval of the finance bill in parliament.

Furthermore, the first tranche of $500 million was received from Qatar, along with loans arranged from syndicated banks and the World Bank, which aided the foreign currency reserves, improving investors’ sentiments.During the week, the rupee strengthened to 157 against the US dollar from nearly 160.5 last Friday.

The positive momentum seen at the start of the trading week petered out later due to possible monetary tightening as a result of rising inflationary pressure.

Among major developments on the economic front, the International Monetary Fund (IMF) approved a $6-billion Extended Fund Facility and its first tranche amounting to $1 billion was expected to arrive soon.

However, the true effects of the news were somewhat diluted as the government began a crackdown on Benami assets on expiry of the amnesty scheme on July 3. Around 100,000 more people became filers of tax returns, which helped broaden the tax base by another 5%.

Despite commitment from Saudi Arabia and China to continue to support Pakistan with debt rollover, the stock market took a battering due to domestic cues arising from the closure of operations by key businesses.

Investors resorted to profit-taking in the wake of protest by cement and automobile dealers and the closure of textile units due to budgetary measures. The benchmark index recorded profit-taking in the last two trading sessions, which erased approximately 713 points from the index. Investor participation took a hit as average daily trading volumes dropped 41% to 87 million shares while average daily traded value went down 29% to $20 million.

In terms of sectors, contribution to the market’s uptrend was led by fertiliser producers (up 180 points) amid news of gas infrastructure development cess (GIDC) settlement up to 50%, commercial banks (122 points) with indication of further rate hike, chemical companies (18 points), insurance firms (14 points) and automobile assemblers (13 points).

Market watch: KSE-100 falls due to lack of positive triggers

Foreign buying continued during the week as well, which came in at $5.9 million compared to net buying of $7.9 million last week. Major buying was witnessed in power generation and distribution companies ($3.7 million) and commercial banks ($1.7 million). On the domestic front, major selling was reported by insurance companies ($4.6 million), followed by mutual funds ($2.6 million).

Major news of the week included the World Bank approving $722 million in loan for Pakistan, inflation in June standing at 8.9%, government announcing 168% rise in gas prices, forex reserves dropping to $7.3 billion and start of deferred oil payment facility from Saudi Arabia, which would allow $3.3 billion worth of oil to be imported per annum for three years.