Maryam reveal­s clip which purpor­tedly shows judge saying old video of him was used for blackm­ail
By Our Correspondent
Published: July 6, 2019
Tweet Email 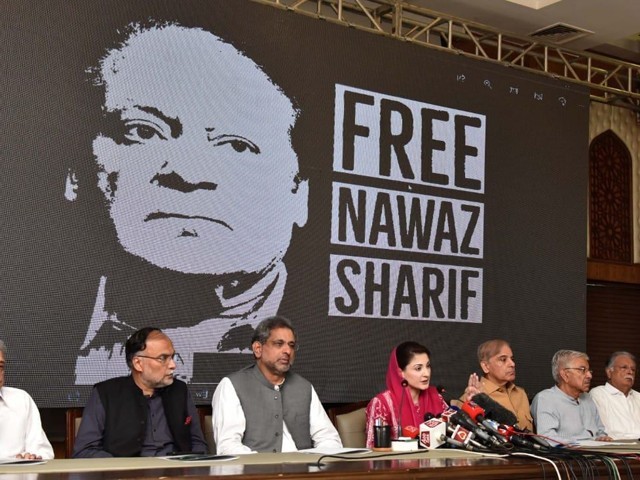 LAHORE: PML-N Vice President Maryam Nawaz on Saturday revealed a ‘damning’ video that purportedly shows accountability court judge Arshad Malik admitting that he had been ‘blackmailed’ into convicting jailed ex-premier Nawaz Sharif despite the fact there was no evidence of corruption against him in Al-Azizia reference.

The ‘explosive video’, which has yet to be verified independently, was shown to media persons by Maryam at a crowded news conference in Lahore where she was flanked by senior PML-N leaders, including Shehbaz Sharif, Shahid Khaqan Abbasi and Ahsan Iqbal.

In the video, the judge is purportedly having a conversation with a man, named Nasir Butt, who Maryam described as a PML-N worker. The judge can be heard telling Butt that he had been ‘blackmailed’ using a private video of him shot 10 years earlier.

Malik allegedly goes on to say that he considered committing suicide after the blackmailers threatened to go public with that video if he did not convict Nawaz and had no other option but to give in to pressure as he had seen the consequences faced by others who had defied them.

The judge allegedly tells Butt that there was no evidence of corruption against Nawaz and the entire premise of assets-beyond-means case was inherently flawed as there were no assets that could be legally associated with the former prime minister with documentary evidence.

“If the assets were determined on the basis of the former prime minister’s tax returns and if they were incorrect, it was at best a case that should have been dealt under tax laws,” the video purportedly shows the judge saying.

It further shows the judge telling the PML-N worker that there was no evidence of the former premier’s son Hussain Nawaz running a business in Pakistan or that he and Nawaz had transferred money from Pakistan to another country.

The purported judge says that the Joint Investigation Team (JIT) or National Accountability Bureau (NAB) were neither able to establish how Hussain had set up his business out of the country and earned money, nor did they try to gather evidence from Saudi Arabia involving its judicial system about embezzlement of funds.

The purported video also shows the judge maintaining that the prosecution had failed to link Nawaz with the acquisition of properties in London in the Panama case that led to his disqualification. “When there are multiple possibilities, the one which is most favourable to the accused has to be adopted and should not be stretched in favour of the prosecution. The court’s decision in Hill Metal case was illegal as it violated this law,” the alleged judge is heard as saying.

After playing the video, Maryam said the judge who had announced the verdict against Nawaz Sharif has now declared him innocent. “Now, if he [Nawaz] remains in jail even for a minute, then this will be a great injustice not only with the three-time former premier but with the people of this country,” she added.

She maintained that the judge was a friend of party worker Nasir Butt and they used to converse on a regular basis. The judge, she added, told Butt that he was feeling guilty over handing down an unjust verdict under pressure and he wanted to help out Nawaz by narrating some points that could assist the former premier’s legal team.

“The accountability court judge invited Nasir Butt to his house to share those points and that’s where the video was recorded,” she added.

The PML-N vice president warned that if there were conspiracies or dirty tricks, she could come up with more evidence.

Maryam added that she did not want to confront the state institutions.

“I am not against any particular institution… and since all allegations against Nawaz Sharif having been proved wrong, all cases against him should be declared null and void and he should be cleared of all charges.”

Accusing the Pakistan Tehreek-e-Insaf (PTI) government of “plotting” against the PML-N, Maryam said Prime Minister Imran Khan was among the people who had destroyed the country.

PML-N President Shehbaz Sharif said the video was irrefutable evidence of injustice meted out to Nawaz. “I hope that after this undeniable evidence, the Supreme Court and other national institutions will provide justice to the three-time prime minister of the country,” he added.