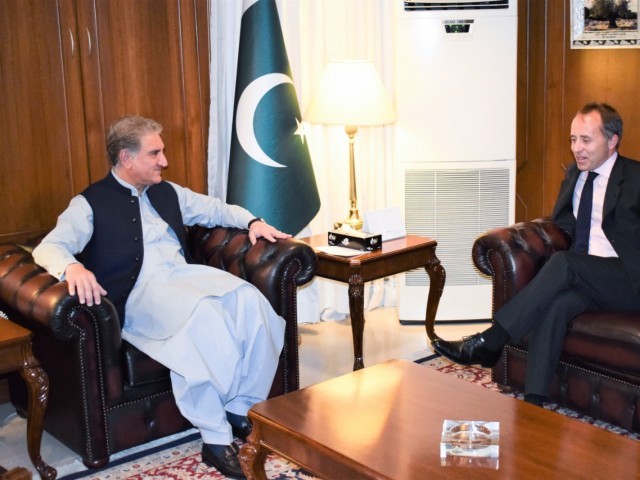 Foreign Minister Shah Mehmood Qureshi on Thursday expressed concern on the display of anti-Pakistan banners during a recent cricket World Cup match and took up the matter with British High Commissioner Thomas Drew.

Qureshi also discussed the disrespectful attitude the national team was subjected to during the Pakistan-Afghanistan match.

The foreign minister, during the meeting with the British envoy, said the use of the stadium for anti-Pakistan propaganda was concerning, Radio Pakistan reported.

Islamabad had earlier condemned the unruly conduct of certain groups of spectators during the Pakistan-Afghanistan World Cup cricket match.

A Foreign Office statement had taken exception to the flying of anti-Pakistan banners and the ‘unruly conduct of spectators toward Pakistan team players’ saying that the scuffles during the Pakistan-Afghanistan World Cup cricket match were a matter of deep concern.

Pakistan and Afghanistan fans clashed last Saturday in Leeds during the cricket match and a certain faction of Afghanistan supporters clashed with Pakistan fans and security officials and hurled abuses — both inside and outside the stadium.

Shah Mehmood Qureshi further said Prince William and his wife Kate Middleton’s possible visit to Pakistan this autumn is good news, and the government and people of Pakistan welcome this announcement by Kensington Palace.

The Kensington Palace announced earlier this week that the Duke and Duchess of Cambridge will be undertaking a trip to Pakistan in autumn.

The trip will mark Kate and William’s first visit to Pakistan, though the royals visited India in 2016.

Matters of bilateral relations, security situation in the region and other matters of mutual interest were also discussed in the meeting.

The two sides expressed satisfaction over the current state of bilateral relations.