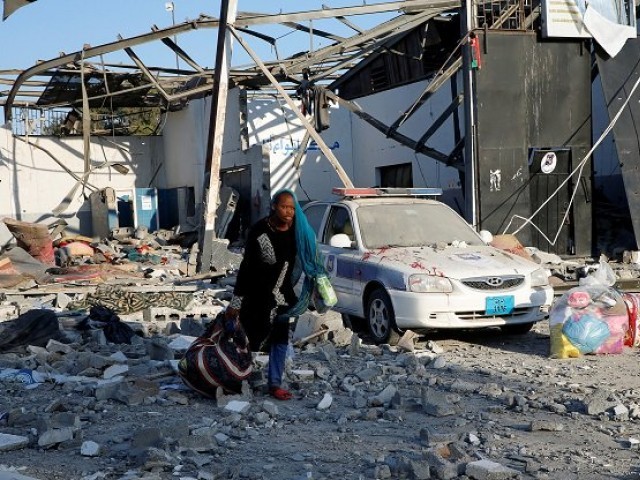 A migrant picks up her belongings from among rubble at a detention centre for mainly African migrants that was hit by an airstrike in the Tajoura suburb of the Libyan capital of Tripoli. PHOTO: REUTERS

UNITED NATIONS/ UNITED STATES: The divided UN Security Council on Wednesday failed to condemn an attack on a detention centre for migrants in Libya after the United States did not endorse a proposed statement, diplomats said.

During a two-hour closed-door meeting, Britain circulated a statement that would have condemned the deadly air strike blamed on commander Khalifa Haftar’s forces, called for a ceasefire and a return to political talks.

But US diplomats told the meeting that they required green light from Washington to approve the text and the talks ended without US approval, sources told AFP.

At least 44 people were killed when the airstrike hit the Tajoura detention centre late Tuesday and more than 130 were severely wounded, according to the UN.

Peru’s Ambassador Gustavo Meza-Cuadro, whose country holds the council presidency, told reporters that discussions were continuing on the press statement but council diplomats said they did not expect a response.

Haftar, who holds sway in eastern Libya, launched an offensive in April to seize Tripoli, the seat of a UN-recognised government that is backed by various militias.

World powers have been divided on how to respond to Haftar’s military campaign, with the United States and Russia refusing to back UN calls for a ceasefire.

The proposed statement would have called on warring sides to “immediately de-escalate the situation and commit to a ceasefire”.

The government of national accord, based in Tripoli, said Haftar’s forces, was responsible for the strike on the detention centre.

A US State Department statement released in Washington earlier condemned the “abhorrent” air strike but did not call for a ceasefire.

UN Secretary General, Antonio Guterres, earlier said he was outraged and called for an independent investigation into the deadly strike.

He recalled that the United Nations had shared the coordinates of the detention centre with the warring sides to ensure that civilians sheltering there were safe.