‘Dying’ of thirst: Farmers march 150kms in quest for water

‘Dying’ of thirst: Farmers march 150kms in quest for water 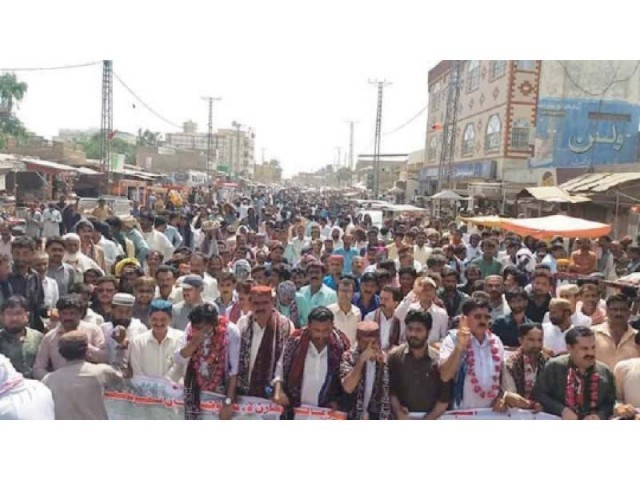 Scores of farmers from Kharo Chan reached Thatta on Wednesday after travelling 150 kilometres on foot. The protest aimed to highlight the pressing issue of water scarcity and demand the government to allow more water to reach the tail end of River Indus. PHOTO: EXPRESS

THATTA / KARACHI: Scores of farmers, who had started their ‘long march’ from Kharo Chan around a week ago, reached Thatta on Wednesday after travelling 150 kilometres on foot. The march aimed at raising awareness about the scarcity of water in the region and the resultant erosion of the farmlands by the sea as the flow of water declines in the Indus River.

The protesters, who initially comprised only farmers, were joined by members of political parties and welfare organisations, as they made their way through Sajjan Wari, Baghaan, Gharo, Buhara, Sakro, Gujjo and Makli  to reach Thatta. At each town, the protesters received a warm welcome, with locals showering them with rose petals in a bid to show their sympathy to the cause.

As the farmers marched along the route, they shouted slogans such as “Paani naahe chho bhala, Karbala Karbala [There is Karbala like situation in the area without water]”. Others carried banners inscribed with slogans such as “Give us water to quench our thirst”.

Water scarcity has been a pressing issue in what is known as the tail-end region of the Indus River or the Indus Delta for the past several years, with political leaders and welfare organisations frequently pointing toward sea erosion and displacement of farmers as a cause of concern. What was different about this ‘long march’, however, was that it was the farmers of the Kharo Chan and its surrounding areas who took up the initiative themselves. Kharo Chan is located at the point where the Indus River flows into the Arabian Sea. Its inhabitants have borne the worst of the effects of sea erosion and decreasing levels of the Indus River.

Swallowed by the sea

According to estimates, nearly 2.5 million acres of Thatta and Badin districts have been eaten away by sea water. Environmentalists fear that if the sea intrusion is not stopped, sea water will reach Thatta by 2050 and the Indus Delta will be completely submerged.

“We are living on the bank of the River Indus, which is now filled with sea water. Since there is no sweet water flowing in the Indus at its tail end, the sea water is gushing back to the water bed,” said Noor Mohammad Thaheemor, a farmer from Kharo Chan.

Referring to the sea intrusion, he said, “There are around 42 dehs in Kharo Chan taulka, of which 28 have been eroded by sea water,” he said, adding that people from Shah Bunder, Jati, Chohar Jamali, Keti Bunder have migrated to others barrage areas of Sindh. “Around 5,000 families from Jati taulka of Thatta have moved to other places following the lack of sweet water and sea erosion,” he remarked.

Gulab Shah, whose family owned the largest tract of land in the area, said, “Keti Bunder was once a bustling port of Thatta. Now, one can see dry canals and barren land encroached upon by sea water.  People and animals share the same pond to drink water. We have spent most of our lives in search of water. He added that they have been protesting for the last many years, but no one heeds their plight.

The protest is not confined to Thatta district. Reports pouring in from various districts of Sindh point to a severe shortage of water, particularly in the summer season. In the past month alone, residents have been protesting in Khoshki, Talhar, Golarchi and Matli areas of Badin. A large demonstration was also held in Mirpurkhas area, where farmers and people living in tail-end areas staged a sit-in to protest the water shortage.

Abdul Qadir Tanto of Awami Tehreek told The Express Tribune that they would soon summon a meeting of various political parties to devise a line of action regarding water scarcity.  “No one from the government heeds to us, so we will plan a massive agitation against water shortage by organising sit-ins and hunger strike in Karachi and other districts of Sindh,” he said.