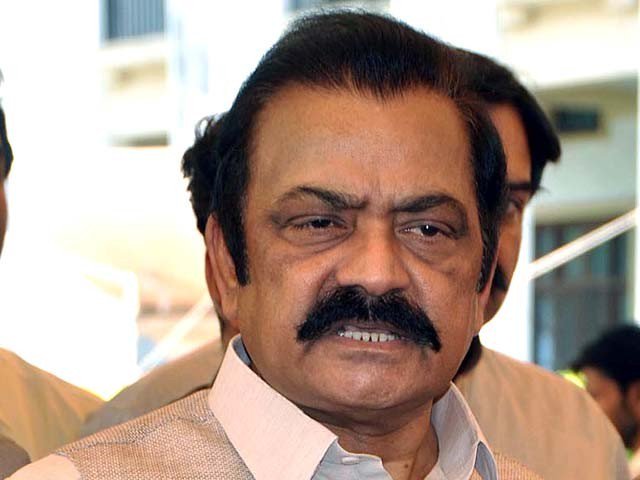 Rana, who served as the Punjab law minister during the previous PML-N government, was arrested by ANF Lahore from the Islamabad-Lahore motorway near Sukheki, while he was traveling from Faisalabad to Lahore.

The ANF is responsible for curbing drug use and smuggling. It said in a statement: “We do not make arrests without reason. A large quantity of drugs was recovered from Sanaullah’s car,” adding that the quantity and type of drugs recovered was still being assessed.

ANF sources said that Sanaullah has been shifted to an ANF police station, while force commander Brig Khalid Mehmood is monitoring the investigation process. The sources added that he would be charged under the Anti-Narcotics Act.

“We are having some difficulties getting information from ANF Lahore,” a spokesperson said. “ANF Headquarters Rawalpindi is in touch with ANF Lahore. A statement on the drugs recovered can only be issued after completion of due process,” he added.

A close aide to the Sharif brothers, Sanaullah is the former Punjab minister for law. He was elected Member of the National Assembly from Faisalabad in July 2018 general elections. He was appointed as the PML-N Punjab President in May this year.

The opposition parties strongly condemned the arrest of Rana Sanaullah. PML-N President Shehbaz Sharif has summoned a high-level party meeting in Lahore on Tuesday (today) to discuss the arrest and a future strategy.

In a statement Shehbaz condemned the arrest of Rana Sanaullah without any case, describing it the “worst example of lawlessness and political vendetta”. He accused Prime Minister Imran Khan of using state institutions to pressure political opponents. “Sometime NAB, “sometime NAB 2 and sometimes ANF are being used to arrest political opponents, which is regrettable,” he said.

PML-N spokesperson Marriyum Aurangzeb demanded of the authorities concerned to present Rana Sanaullah in the relevant court and must be informed about the charges against him. She also blamed Prime Minister Khan for the arrest.

Senior Vice President of the PML-N, Maryam Nawaz said that Rana Sanaullah was arrested for his bold stance against the Pakistan Tehreek-e-Insaf (PTI) government. “What has ANS[F] got to do with Rana Sanaullah? It could not get more absurd,” she tweeted.

What has ANS got to do with Rana Sanaullah? It could not get more absurd. He has been arrested for his bold & courageous stance. Jaali-e-Azam being the small & petty minded man that he is, is directly behind his arrest. Make no mistake. https://t.co/7ziuR51u6h

Pakistan Peoples Party (PPP) Chairman Bilawal Bhutto Zardari described the arrest of Rana Sanaullah as the government’s “desperate attempt at political victimization”. Sanaullah has been a vociferous critic of PPP in the past & is currently one of the most vocal critics of the regime. Arrests expose govts weakness & desperation,” he wrote in a tweet.

Arrest of President Punjab PMLN by Anti-Narcotics force is obviously desperate attempt at political victimization. Sanaullah has been a vociferous critic of PPP in the past & is currently one of the most vocal critics of the regime. Arrests expose govts weakness & desperation.