In midst of all the chatte­r, India sent out an import­ant messag­e to teams lining up for semis, which everyo­ne missed­
By Abdul Majid
Published: July 1, 2019
Tweet Email 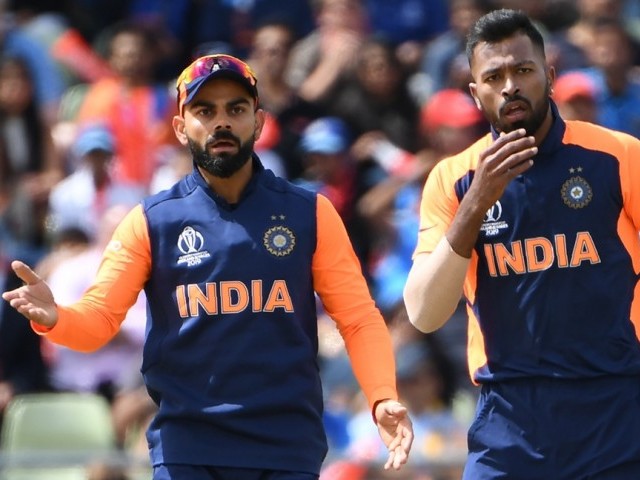 Pakistanis are not the only ones fuming after England’s win on Sunday, since the Indian fans are also angry that their team played slow to stay out of contention of victory.

Imagine a team which is considered a batting powerhouse, and then imagine that they only scored one six during their entire 50 overs.

Not only that, but what else was also baffling that they were not short of wickets to throw while trying to go big. The final scorecard said that India had half of their batting line-up waiting when the innings culminated and an unbeaten MS Dhoni, famous for his blistering batting, walked back with 42 from 31 balls.

Pakistanis pray for India win – and for a good reason

India fell 31 runs short of the target on Sunday with five wickets in hand against England, and it may seem the pitch was doing too much in the second innings to help Virat Kohli and co’s case, but if we believe that then how did Rohit Sharma score a century at nearly run-a-ball with ease at the top or the order even after losing his opening partner early on?

While one batsman’s antics may not be considered enough data for any deductions, Kohli’s own innings, 66 off 76 balls, with only seven boundaries, showed that India were not in it to win it, since the India skipper is considered the best batsman of the current generation. Why didn’t he play aggressively knowing the target was relatively steep and a few quick runs would help?

They all might be conspiracy theories, but Pakistanis will never digest the fact that India may have lost on merit and it was not easy to chase down a 338-run target. On the other hand, Indian fans and cricket legends are divided on the result too.

India’s loss means Pakistan’s path to semis has become more difficult, which is a treat for a few Indian fans; the social media posts are a clear indication of that. The political rivalry between the Asian arch-rivals can never be removed from any sporting tournament, and Pakistan losing out on a semis spot, even at the cost of India losing their remaining group matches, is fine with a few Indian fans.

India’s legends of the game, meanwhile, are perplexed by the show that India put on at Birmingham. Many couldn’t muster up any reason for the way India lost, where they could’ve easily stepped on the gas and won the game.

However, in the midst of all the chatter, there was one important message that India sent out to the teams lining up for the semis, which nearly everyone missed out.

For argument’s sake, if we consider it true that India didn’t cross the line on purpose then the way they did it shows that they have a near-full control over their batting and how they pace their chases.

This is a dangerous sign if we are hoping that they might play Pakistan in the semis of the final of the World Cup, if Sarfaraz and co somehow make it to the top-four.

While Pakistan were able to outclass India in the 2017 Champions Trophy final, it may not be the case this time since India have grown stronger since that defeat. The controlled loss to England, if it was such, should be proof that they will not be easy to face come the business end of the World Cup.

Harbhajan lambasts Basit Ali for his statement against India