Pakistan, Afghanistan agree not to give ‘hostile’ statements

Pakistan, Afghanistan agree not to give ‘hostile’ statements 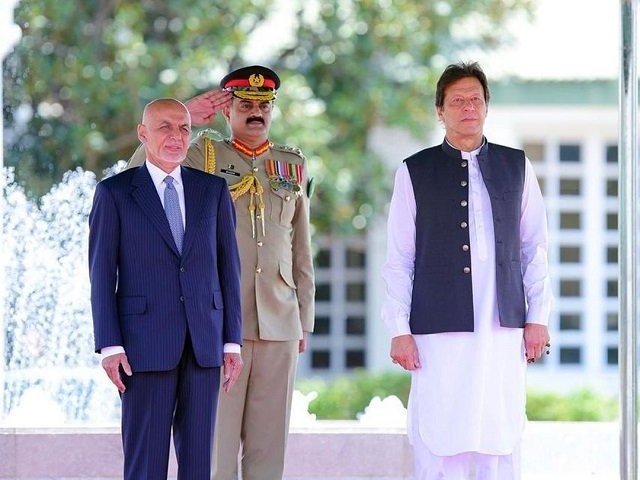 ISLAMABAD: Pakistan and Afghanistan have decided not to use public forums to blame each other or give ‘hostile’ statements against each other in order to build trust considered vital to address some of the pressing issues facing the two neighbours.

The decision was taken during the recent visit of Afghan President Ashraf Ghani to Islamabad, where he held wide-ranging discussions with Prime Minister Imran Khan and the top military leadership of the country.

This was Ghani’s first visit since 2015 and was part of latest efforts by Pakistan to improve troubled ties with Afghanistan.

Officials familiar with the closed-door meeting between Ghani and Imran, who were both assisted by their respective aides, told The Express Tribune that both sides agreed that “to create better atmosphere, it was important that both countries must avoid blaming each other at public forums”.

Officials said the two countries agreed to use “appropriate diplomatic channels” to convey concerns instead of resorting to giving public statements.

Relations between Pakistan and Afghanistan have remained tense for years largely because of the trust deficit. The Afghan leadership has often in the past publically accused Pakistan for ‘creating mess’ in their country.

President Ghani also gave several statements pointing fingers at Pakistan for the unrest in Afghanistan. Islamabad, however, always dismissed such allegations and continued to reach out to Kabul for sorting out all issues through dialogue.

Hostile statements, according to officials here, contributed to further vitiating the environment between the two countries.

They cited the recent example of Cricket World Cup match between Pakistan and Afghanistan at Headingley, Leeds, where spectators from the neighboring country attacked the Pakistani fans.

“We can avoid such incidents if positive messages come from the leadership of the two countries,” the official added while stressing that Pakistan never wanted to indulge in a blame game.

The official said Pakistan had also reservations on several issues including lack of action by Afghan authorities against groups involved in the cross-border attacks but it always tried to avoid accusing Kabul publically.

“We are always willing to discuss such issues through diplomatic and other channels,” the official added while requesting anonymity.

The official said the Afghan president acknowledged that both sides need to bury the past and look to the future.

That positive sentiment was also reflected in a statement issued by the Prime Minister Office, in which it said that both Prime Minister Imran and President Ghani agreed to “open a new chapter of friendship and cooperation between Pakistan and Afghanistan, based on mutual trust and harmony for the benefit of the two peoples and countries and for advancing the cause of peace, stability and prosperity in the region.”

Observers, however, are skeptical if President Ghani’s visit may lead to any dramatic change in the relationship between the two countries given the challenges. A lot will depend on the outcome of the ongoing talks between the United States and the Afghan Taliban, they added.