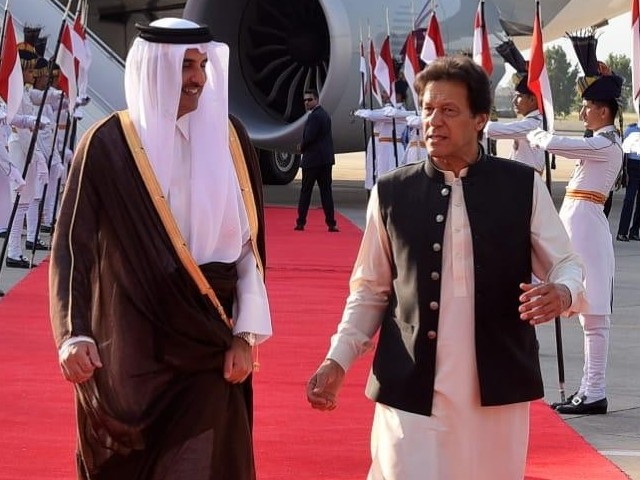 KARACHI: Qatar, a brotherly country, has deposited the first tranche of $500 million with the State Bank of Pakistan’s (SBP) foreign currency reserves out of the total $3 billion Doha pledged to deposit and invest to strengthen economic ties with Islamabad last week.

“$500 million received from Qatar,” the State Bank of Pakistan (SBP) confirmed to The Express Tribune on Saturday.

Qatar has emerged as the fourth brotherly and friendly country to having extended a financial assistance package at times when Islamabad is facing an acute shortage of dollars to shore up its foreign currency reserves.

China, Saudi Arabia and United Arab Emirates deposited a total of $9.2 billion in cash with the SBP’s foreign currency reserves during the outgoing fiscal year ending on June 30, 2019.

However, heavy import payments and debt repayments did not let the foreign currency reserves stabilise mainly due to sluggish exports.

The reserves have depleted to six-month low at $7.28 billion in the week ended June 21, 2019, as per SBP latest updates on Thursday. The reserves are just $700 million higher than almost five-year low at $6.63 billion recorded in the week ended on January 18, 2019, according to the central bank.

The consistent drop in the reserves kept mounting pressure on rupee which weakened by almost 32% during the outgoing fiscal year 2019 to Rs160.05 to the US dollar on Friday (June 28) as compared to its opening rate of Rs121.49 on the first working day of the year on July 3, 2018.

Following the receipt of the first tranche of $500 million from Qatar, the reserves are expected to improve and help the rupee partially recover ground against the greenback next week.

The other related developments which would provide the much-needed support in building the reserves and helping the rupee strengthen, going forward, are including International Monetary Fund (IMF) executive board’s formal approval for a 39-month long Extended Fund Facility (EFF) worth $6 billion for Islamabad on Wednesday (July 3); beginning of petroleum oil supplies worth $275 million per month on deferred payment to Islamabad under Saudi Arabia credit line of a total of $3.2 billion for the next three years; and expected inflows from World Bank and the Asian Development Bank (ADB).

“By announcing this new investment package ($3 billion) on Monday, the size of the Qatari-Pakistani economic partnership will amount to $9 billion,” the Qatari foreign minister said in a statement released by Qatar News Agency (QNA) earlier this week.

There is; however, no break-up of the $3 billion Qatari aid available; as to how much of this Doha would provide in cash deposits in soft loan to SBP and how much it would directly invest in various sectors of the Pakistan economy like power and construction.

Qatar and Pakistan also signed three memoranda of understanding (MoUs) during the two-day visit of Emir of Qatar Sheikh Tamim bin Hamad Al Thani to Islamabad. The MoUs were signed to establish Pakistan and Qatar Joint Working Group on trade and investment; for cooperation in the field of tourism and business events; and for establishment of cooperation in the field of exchange of financial intelligence related to money laundering associated with predicate offences and terrorism financing.