'Back on track': China, US agree to restart trade talks

'Back on track': China, US agree to restart trade talks

Trump says he will not lift existi­ng tariff­s, but will refrai­n from slappi­ng new levies­
By Reuters
Published: June 29, 2019
Tweet Email 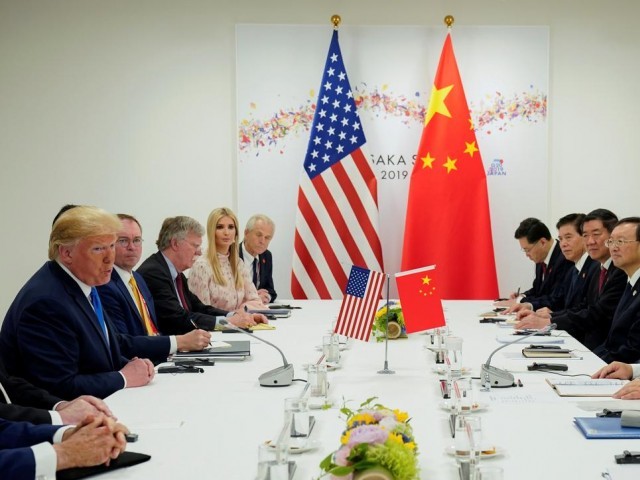 Trump says he will not lift existing tariffs, but will refrain from slapping new levies. PHOTO: REUTERS

OSAKA: The United States and China agreed on Saturday to restart trade talks with Washington holding off new tariffs on Chinese exports, signalling a pause in the trade hostilities between the world’s two largest economies.

Commenting on a long-running dispute over China’s Huawei, President Donald Trump said US firms would be able to sell components to the world’s biggest telecoms network gear maker where there was no national security problem.

The truce offered relief from a nearly year-long trade standoff in which the countries have slapped tariffs on billions of dollars of each other’s imports, disrupting global supply lines, roiling markets and dragging on global economic growth.

“We’re right back on track and we’ll see what happens,” Trump told reporters after an 80-minute meeting with Chinese President Xi Jinping on the sidelines of a summit of leaders of the Group of 20 (G20) major economies in Osaka, western Japan.

Trump said while he would not lift existing import tariffs, he would refrain from slapping new levies on an additional $300 billion worth of Chinese goods – which would have effectively extended tariffs to everything China exports to the America.

He gave no timeline for what he called a complex deal but said he was not in a rush. “I want to get it right.”

On Huawei, Trump said the US commerce department would meet in the next few days on whether to take it off a list of firms banned from buying components and technology from US companies without government approval. China welcomed the step.

“If the US does what it says, then of course, we welcome it,” said Wang Xiaolong, Chinese Foreign Ministry’s envoy for G20 affairs.

Huawei has come under mounting scrutiny for over a year, led by US allegations that “back doors” in its routers, switches and other gear could allow China to spy on US communications.

While the company has denied its products pose a security threat, the United States has pressed its allies to shun Huawei in their fifth generation, or 5G, networks and has also suggested it could be a factor in a trade deal.