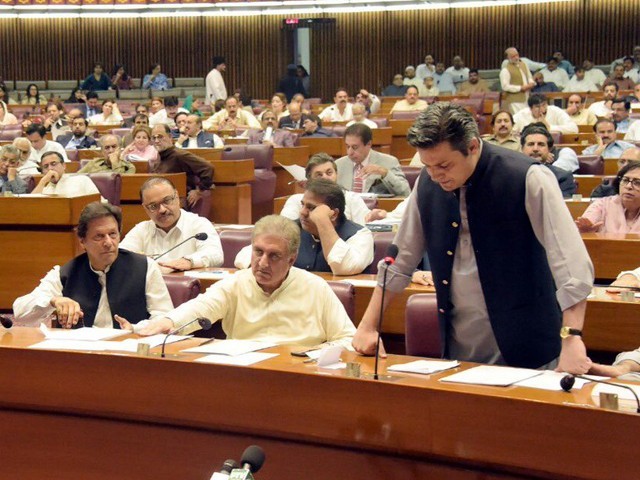 ISLAMABAD: The National Assembly on Friday passed the federal budget with a majority vote, approving the finance bill 2019-20 to give effect to the financial proposals of the Pakistan Tehreek-e-Insaf (PTI) government.

The total outlay of the budget was Rs7.022 trillion, focusing on fiscal consolidation, revenue mobilisation, austerity measures and protection to the vulnerable segments of society.

At the start of the proceedings, Minister of State for Revenue and Finance Hammad Azhar moved the motion to present the finance bill before the house for consideration and voting.

After voice voting on the motion to introduce the bill, the opposition challenged the vote and asked the Speaker for a head count. 176 members of treasury benches favoured the motion while 146 members of opposition opposed it.

After passage of the motion with majority vote, the revenue minister introduced the finance bill for approval by line items.

Prime Minister Imran Khan along with federal ministers of PTI and allied parties sat through the session spread over many hours while opposition led by Shehbaz Sharif and Bilawal Bhutto Zardari attended the session with full strength.

During the voting, Speaker Asad Qaiser, on various occasions, urged the members to refrain from raising slogans, observe decorum of the house and desist from making videos from their mobile phones. At times, the members from across the aisle squabbled over rules according to which the speaker runs the house.

The amendments were related to changes in tax rates and finance bill, tax exemptions and abolition of interest on bonds.

While debating the amendments, Shahida Rehmani said the tax collected from Islamabad should be spent on the city for provision of drinking water and other basic facilities. She suggested changes in the income tax ordinance to benefit overseas Pakistanis who buy property abroad.

Abdul Akbar Chitrali said taxes on those providing professional services would burden consumers so it should be withdrawn. He said taxes on essential food items should be brought down. Rehmani, along with Shazia Marri and Mehreen Razaq Bhutto, seconded the demand of Chitrali to reduce taxes on food items including sugar and juices and construction material like cement and steel.

Nisar Ahmed Cheema and Chitrali sought tax relief for Non-Governmental organisations (NGOs) including Al-Khidmat Foundation and Rawalpindi Eye Donors Organization (REDO). Ali Pervaiz and Shagufta Jumani demanded that the tax relief given by the Pakistan Muslim League-Nawaz (PML-N) government to the salaried class in its last year should be restored.

Jumani said the consumers were paying sales tax on every item they purchase from the market.

Abdul Qadir Patel asked for tax exemption for teachers and researchers while Qaiser Ahmed Sheikh said tax should be reduced for cottage industry as the banks were not giving it loans. He wanted removal of federal excise duty on edible oil and lower taxes on local Liquefied Natural Gas and smaller cars.

Shazia Marri said she wanted concessions for Thar coal as was decided in a meeting of Economic Coordination Committee (ECC) in 2010. The Thar coal electricity projects should be exempted from taxes. The taxes would increase cost of coal production that in turn would increase power rates, she noted.

Dr Nafisa Shah proposed amendment in the income tax ordinance 2001, saying delay in tax refunds blocked investment and it was unconstitutional to ask exporters to take bonds instead of refunds.

The treasury benches rejected almost all the amendments to the finance bill moved by the opposition members after discussion on them by both sides. However, amendments moved by the revenue minister were adopted by the house.

Hammad Azhar, during his speech, said due to ‘economic hitmanship’ of the previous two governments, the country’s economy went down to deep crisis.

“During tenure of previous government, Public Sector Entities’ losses surged from Rs123 billion to over Rs500 billion, gas sector losses increased to Rs150 billion, exports declined by $1.5 billion, and increase of only two percent tax to GDP ratio was recorded in previous 10 years,” he said.

The state minister said due to prudent policies of the incumbent government trade deficit plunged by over $4 billion, and although in term of value, the exports remained stagnant during the year 2018-19 but in term of volume, readymade garments’ exports only witnessed an increase of 30%.

He said the government has targeted that tax to GDP ratio would be increased by 4% within three years. The minister of state said debt to GDP ratio which kept on increasing during previous 10 years would come down for the first time in country. He dispelled the impression that the government had imposed new taxes on food items saying that new taxes were imposed only on processed food, fruits, meat and vegetables which were only consumed by the rich.

Hammad explained that no new tax on ghee and wheat flour was imposed but instead it had adjusted some taxes in different heads which apparently gives the impression that sales tax on ghee had been increased from existing 16% to 17%.

With respect to tax on sugar, he said, the opposition members were creating misperception that additional tax of Rs20 per kg of the commodity had been imposed which was wrong.

Explaining the new taxes being imposed on the salaried class, he said during previous two governments, an amount of Rs5,000 income tax was being paid by the person who was taking a salary of Rs100,000 whereas this government had fixed a tax of only Rs2,500 on income of Rs100,000.

He clarified that in the upcoming budget, new taxes were imposed only for rich and lower income people would not be affected by the budget. He said the government would continue taking actions against gas and electricity theft in the country.

Meanwhile responding to amendments proposed by the opposition members, Hammad Azhar said if someone wanted that Al-Khidmat Foundation and Rawalpindi eye donors should be given tax free status, an application should be filed with FBR in this regard. He said this needed a process and could not be amended in a single day as there were already some clauses of Financial Action Task Force (FATF) on some NGOs and some of them were also caught in financing terrorism.

Moreover, he said refunds could not be issued within 30 days as it needed due diligence after verification of documents. However, he added, the refund process would be made speedy as much as possible.

With respect to Shazia Marri’s call for amending a clause to exempt Thar coal power plant from tax on dividends, Hammad said all IPPs were uniformly treated in taxation structure, however, if she wanted a separate preferential taxation system for the project, she should provide all the required documents after the budget, then the government would seriously consider the request.

The revenue minister maintained that refund scheme through bonds was only a sales tax scheme for exporters and it did not apply on the common people. “Even for exporters it is a voluntary scheme and not bound to them to get the bonds,” he said, adding this scheme was helpful for those who wanted immediate clearance on pending refunds which were stuck up for 4-5 years.

Azhar said this was not unconstitutional as this practice was being utilised in all over the word, and securitisation on government debts and government refunds was a normal routine all over the world. He explained that previous government had also announced to extend this facility but it could not finalised the scheme.

“But we have done it and already issued bonds of Rs7 billion and a total of Rs45 billion refunds would be issued under this scheme.”

Meanwhile, opposition parties have rejected the first federal budget presented by the incumbent government, terming it an “anti-people budget”.

Speaking on the floor, former prime minister Shahid Khaqan Abbasi said the recent devaluation in rupee’s value had added Rs1,400 billion to the debt servicing requirement of the country.

“Without increasing our debt, our debt servicing increased. If this continues the same way, next year we could be looking at debt servicing of Rs4,000 billion,” he added.

“The country is not progressing and the government has added 40 per cent more taxes. How will the economy or the country progress? What will happen to the poor? They will face the brunt of this increase,” Abbasi stated.

On the subject of taxes in the budget, the PML-N leader alleged that “people who don’t pay taxes expect the people of Pakistan to pay their taxes”.

Abbasi further said that ministers should “not be angry and should realise name calling and anger will not fix the situation”.

“There are ways to deal with the problems as per the Constitution. We reject this budget since it is against the people. This is the start of the decline for our economy,” he stated.

PML-N leader Ahsan Iqbal, taking the floor after Abbasi, stated that the budget has provided no relief for farmers considering that Pakistan is an agro-based economy.

“The budget for education has also been reduced,” Iqbal stated, adding that the budget is “anti-people, anti-poor and anti-education”.

He asked that the “selected budget” be withdrawn and “a new people-friendly budget should be presented”.