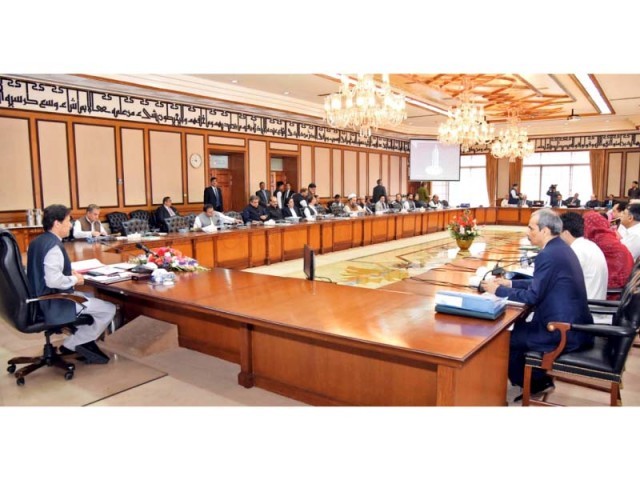 In the past, the finance ministry had taken approval of commercial loans through the circulation of summaries aimed at keeping their terms secret. PHOTO: FILE

ISLAMABAD: The federal cabinet has allowed ministries to get approval of all international agreements through the circulation of summaries instead of bringing them up for discussion, which may exclude contracts like the $6-billion International Monetary Fund (IMF) loan deal from the cabinet’s scrutiny.

International commercial contracts like the multibillion-dollar liquefied natural gas (LNG) deal that the PML-N government had signed with Qatar can now be disposed of through the circulation of summaries.

The federal cabinet took the decision in its second last meeting held under the chairmanship of Prime Minister Imran Khan on June 18, according to the Cabinet Division.

“In future, all cases involving memorandum of understanding (MoU), bilateral agreement of collaboration and international contract shall be disposed of by circulation,” said the decision notified by the federal cabinet.

Special Assistant to Prime Minister on Information Dr Firdous Ashiq Awan was not available for comments. Cabinet Secretary Maroof Afzal also did not reply to request for comments.

The federal cabinet took the decision two weeks before approval of the $6-billion loan package by the IMF. The IMF executive board is scheduled to meet on July 3 in Washington to take up Pakistan’s request for the $6-billion three-year Extended Fund Facility.

Sources in the Cabinet Division said after the June 18 decision, the agreements like the IMF deal are no more required to be placed before the federal cabinet for discussion and approval. Before August 2016, the prime minister was empowered to decide on multilateral deals without notifying the federal cabinet.

Rule 17(1)(b) of the Rules of Business 1973 allows the disposal of cases by circulation of the summaries among federal ministers. But this stops the ministers from discussing such cases during cabinet meetings.

The cases that are disposed of through circulation are not placed on the agenda of the federal cabinet. Summaries that are circulated for the approval of ministers can only be discussed in the cabinet meeting, if a cabinet minister raises any objection. The disposal of the official business through circulation is against the spirit of collective wisdom and responsibility.

In the past, Rule 17(1)(b) had been used in matters where the government did not want to bring these issues in the knowledge of the public. The rule is also invoked in the case of urgency. The deals like the IMF bailout package carry huge political, social and economic implications. After the cabinet’s decision, these agreements would no more be subject to any scrutiny by the full federal cabinet.

In the past, the finance ministry had taken approval of commercial loans through the circulation of summaries aimed at keeping their terms secret. The last IMF deal had been signed in 2013 – three years before the SC judgement – and had not been placed before the federal cabinet for approval. Before the SC judgment, the matters used to be disposed of by only taking the approval of prime minister.

Sources said there were many MoUs that did not require the cabinet’s approval. They said such MoUs were discussed and decided with the consent of the Ministry of Law and Justice, Ministry of Foreign Affairs, Ministry of Interior and the sponsoring ministry concerned.

Rule 16(h) says proposals involving negotiations with foreign countries, like the exchange of diplomatic and commercial representation, treaties and agreements, visits of goodwill missions, representation at international conferences and meetings will be brought before the cabinet for approval.

The decision to settle important matters by circulating the summaries among the ministers is not an isolated incident. In the proposed budget for 2019-20, the Pakistan Tehreek-e-Insaf government has amended all the four fiscal laws to give back some of the federal cabinet’s powers to the finance minister in fiscal matters.