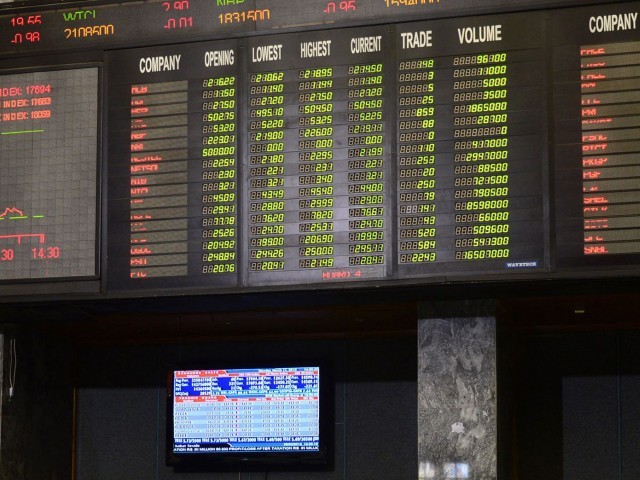 KARACHI: Bears continued to dominate the stock market on Wednesday as the benchmark index retreated 102 points due to the fall in rupee’s value during the day.

The rupee traded above Rs162 against the US dollar in intraday trading.

According to Aba Ali Habib Securities, the KSE-100 index has lost over 1,000 points since the start of the week. Investors remained cautious and trimmed their positions amid weak economic outlook and staggering rupee depreciation, the research house added.

Earlier, trading began on a positive note but selling pressure gripped the bourse later as the rupee lost ground, pushing the index down by over 450 points in intraday trading. A buying spree near the end of the session partially wiped off the losses and the index closed the day above 34,000 points.

“The bourse touched a high of +100 points but soon lost ground, hitting a low of -459 points as pressure was seen on financial, cement and exploration and production stocks,” he said.

In the financial sector, HBL (-2.7%) and UBL (-1.7%) remained in the red. Mixed sentiments were seen in the exploration and production sector where Oil and Gas Development Company (+0.2%) and Pakistan Oilfields (+1.4%) were positive but Pakistan Petroleum (-0.6%) went down.

“We expect the market to remain sensitive to any jitters on the economic and political fronts,” the analyst added.

Arif Habib Limited, in its report, stated the market continued its downtrend but it recovered towards the end of the session, restricting the loss to -102 points.

In volumes, the sector-wise performance was led by the power sector with 35 million shares, followed by financial and cement sectors (19 million shares each).

The cement sector remained under pressure throughout the day because of a host of reasons including the gas tariff hike by the government.

Overall, trading volumes increased to 159.7 million shares compared with Tuesday’s tally of 144.9 million. The value of shares traded during the day was Rs4.89 billion.

Shares of 349 companies were traded. At the end of the day, 112 stocks closed higher, 202 declined and 35 remained unchanged.

Foreign institutional investors were net buyers of Rs419.7 million worth of shares during the trading session, according to data compiled by the National Clearing Company of Pakistan.