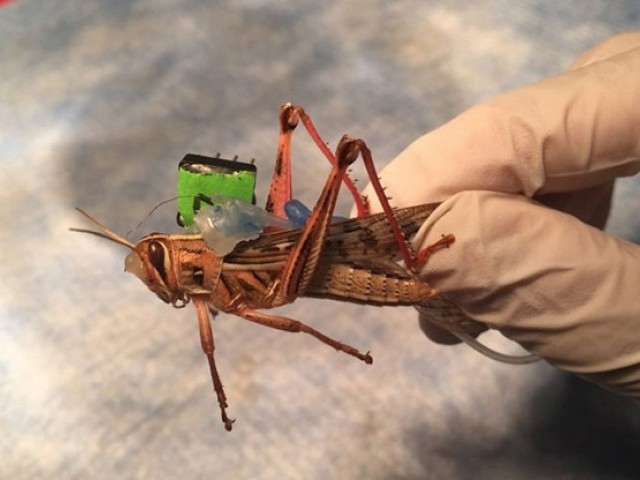 HYDERABAD / KARACHI: Many districts of Sindh have reported the spread of locusts – species of short-horned grasshoppers – which are threating many agricultural crops.

Swarms of locusts have spread to six districts of Sindh after initially attacking Khairpur, sparking fears of large-scale crop devastation in barrage areas.

He voiced concern that if the authorities failed to control the insects, the agriculture sector would suffer huge financial losses of billions of rupees. “Locust attacks are increasing each passing day,” he said and urged the government to carry out aerial and ground operations to kill the insects.

Sindh Abadgar Board Vice President Syed Mehmood Nawaz Shah asked the federal government to launch an international appeal for help. He was of the view that the Ministry of National Food Security and Research’s Department of Plant Protection (DPP) was unlikely to be successful in tackling locusts in Sindh as it had already failed to control the insects in plain areas of Balochistan.

“Monsoon season is round the corner in which locusts multiply faster, hence an international appeal needs to be made,” said Shah while talking to The Express Tribune.

He lamented that the first generation of locusts in Balochistan could not be controlled by the DPP and now the second generation had invaded Khairpur, Dadu, Nawabshah, Matiari, Sanghar and other districts. He cautioned that locusts might cause extensive damage as they had now entered areas heavily cultivated with vegetables.

“Operation should be immediately started in the three districts of Benazirabad Division,” he said.

Jamshoro Deputy Commissioner Fareeduddin Mustafa said the DPP had been approached for initiating insecticide spray on a ‘war footing’ to prevent further damage to vegetation. Mustafa revealed that the district administration would conduct a comprehensive survey in the affected areas to gauge the quantum of losses to crops and farmers.

Sindh Agriculture Extension Khairpur Deputy Director Mushtaq Soomro told The Express Tribune that locusts were controlled in Khaipur’s Nara Desert through aerial and ground spraying of insecticides. However, he believed that the aerial spray was unlikely to give optimal results in other districts of Sindh where ground operation would have to be conducted.

Locusts, which caused a huge damage to Pakistan’s agriculture back in the 1950s, 1960s and 1990s, have once again swarmed an area of 300,000 square kilometres comprising Balochistan’s desert area of Cholistan, Rahim Yar Khan, Bahawalpur, Thar desert, Mirpurkhas, Umerkot, Nara Desert, Khairpur and Sukkur to the Indian border.

“When seen in historical perspective, these areas are prone to locust attack,” said DPP Technical Director Muhammad Tariq Khan while talking to The Express Tribune.

Climatically, these species require sandy area with moisture where they can feed and breed. These insects prefer to live in desert areas but if they fail to find a suitable environment, they turn towards crops. Last epidemics of locusts were witnessed in 1993 and 1997 in Pakistan. There were other small-scale attacks as well but owing to well-coordinated efforts the country was able to thwart the threat without suffering any significant damage.

This time, the locusts first appeared in Sudan and Eritrea in Africa from where they migrated to Yemen and Saudi Arabia and reached Iran where they hit an area of 400,000 square kms and seven regions in March this year.

After that, the insects advanced towards the coastal belt of Pasni and Turbat in Pakistan.

The locusts continued to enter Pakistan from Iran as the neighbouring country was unable to fully contain the pest and recent rains throughout Pakistan provided them a favourable environment, which aggravated the situation. Khan pointed out that five teams of the DPP were surveying and conducting operations in Turbat, Dasht, Gwadar, Jiwani, Lasbela, Khuzdar, Uttal, Kharan, Dalbandin, Washiq and other places. A DPP team is also working in the affected areas of Sindh.

He said the ministry had deployed an aircraft for aerial spray and introduced a training programme to train people how to combat the pest attack.

“The ground control team has ‘treated’ an area of about 2,400 hectares in Thari Mirwah tehsil of Khairpur and it is still working in that area,” said Khan.

The technical director highlighted that the department was conducting ground operations through defender jeeps and was avoiding aerial operation because the spray could have harmful side-effects on the humans and livestock if released in the air. “We will conduct aerial operation if locusts attack on a massive scale,” said Khan. “Mirpurkhas and Thar area is free from the insect while in Rahim Yar Khan, the locusts have been detected but they are few in number and crops have not been affected.”