Protes­ters say they are being punish­ed for voting for the ruling party at the Centre­
By Our Correspondent
Published: June 25, 2019
Tweet Email 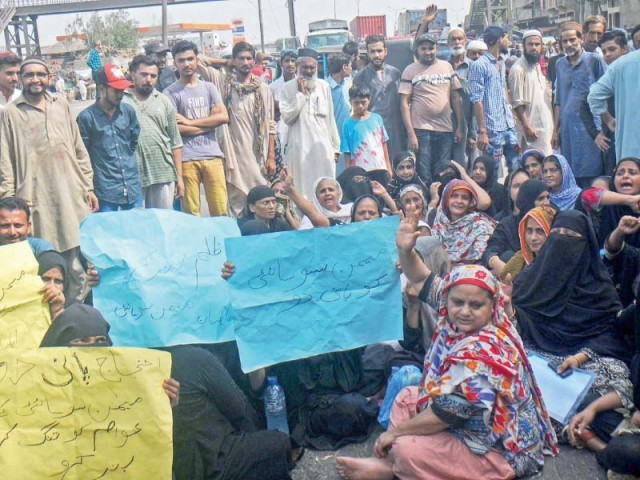 KARACHI: The residents of Lyari once again took to the streets to protest the suspension of water supply in the area on Monday. The protesters blocked Mauripur Road for a couple of hours causing a traffic jam on Mauripur Road, West Wharf, Jinnah Bridge and Native Jetty Bridge.

The agitated protesters, erecting barriers blocked Mauripur Road for traffic and shouted slogans against the Karachi Water and Sewerage Board (KWSB), halting the movement of vehicles carrying goods to and from Karachi Port. The traffic jam lasted for hours.

The protesters complained that for the past six months, water supply in their area had been suspended and despite registering complaints with the water board repeatedly, no steps have been taken yet.

They said that they were being punished for voting for Pakistan Tehreek-e-Insaf (PTI) as the ruling party at the Centre. They added that they would continue to protest until the KWSB authorities assured them that water supply would be restored to their area.

An elderly man and woman fainted during the protest and were promptly taken to a hospital.

The hours-long protest and the resultant traffic jam brought the attention of the police to the suffering of Lyari’s residents. Assistant Commissioner Anwar Ameen along with a heavy contingent of police reached the site for negotiations with the protesters. He assured them that the issue of water supply and several others would be resolved. The protesters peacefully dispersed after negotiations and Mauripur Road opened for traffic.