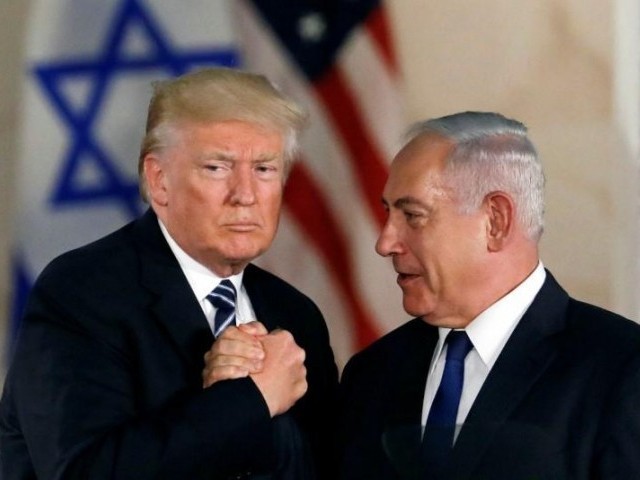 DUBAI: The United States is set to co-chair a two-day conference in Bahrain from Tuesday focusing on the economic aspects of President Donald Trump’s Israeli-Palestinian peace plan.

The workshop in Manama will bring together government, civil society and business leaders, according to a joint statement by the two organising countries, with the declared aim of achieving Palestinian prosperity.

The Bahrain conference could see large-scale investment pledges for the Palestinian territories but is unlikely to focus heavily on the political issues at the core of the Israeli-Palestinian conflict.

The Palestinians confirmed in May they will not participate in the conference, adding they were not consulted beforehand.

“Palestine will not attend the Manama meeting,” a statement on the Palestine Liberation Organisation’s (PLO) website said.

“This is a collective Palestinian position, from President Mahmud Abbas and the PLO Executive Committee to all Palestinian political movements and factions, national figures, private sector and civil society.”

Abbas reiterated his position on Saturday as the US unveiled details of the plan, saying a political solution must come before any discussion of economic issues.

The Palestinians have boycotted the US administration since Trump broke with decades of consensus and recognised Jerusalem as Israel’s capital in December 2017.

They consider the eastern part of the city the capital of their future state and have opposed the proposed US peace plan, which they fear will be heavily biased in favour of Israel.

“An important conference will soon be held in Bahrain and Israelis will of course participate,” he said this week.

However, it was unclear whether Israel would be represented by government officials or business leaders.

Riyadh said it would dispatch Economy and Planning Minister Mohammed al-Tuwaijri to the meeting.

It added the participation reaffirms the kingdom’s “firm position to support the Palestinian people to achieve their stability and growth”, according to the official Saudi Press Agency.

Abu Dhabi’s foreign ministry said it would send a delegation, while reiterating that it supports the establishment of a Palestinian state with east Jerusalem as its capital.

It remains unclear whether Qatar – isolated by regional former allies, including Bahrain, in a long-running diplomatic dispute – will attend the conference.

Doha, a close US ally, said it “has followed the call by the United States” to hold a workshop in Manama, according to a foreign ministry statement.

It added it will “spare no effort” to address challenges facing the Arab region but did not say whether Qatar will be represented at the meeting.

Kuwait and Oman have not confirmed if they will attend.

The White House said on June 12 that Egypt, Morocco and Jordan have agreed to attend the workshop.

UN to stay away from Mideast conference in Bahrain

The three US allies “informed us that they will be attending the workshop,” a senior White House official told AFP on condition of anonymity.

Jordan and Egypt – the only Arab countries to have signed peace deals with Israel – finally confirmed their attendance on June 22.

The treaty in Jordan, however, is overwhelmingly opposed by the people – more than half of whom are of Palestinian origin.

The United Nations announced on June 12 that it would send its deputy Middle East coordinator Jamie McGoldrick to the event.