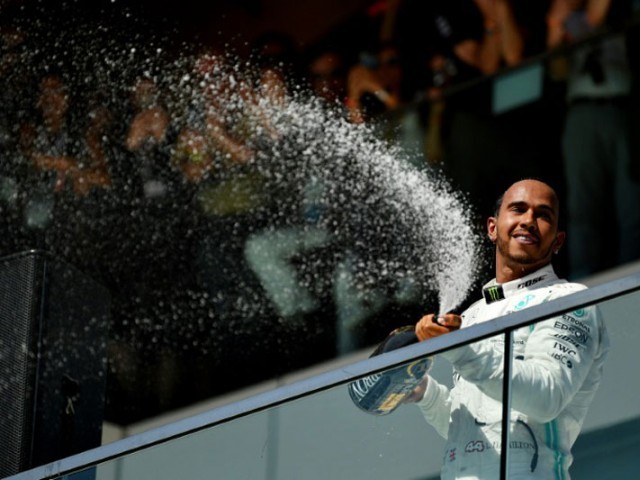 Hamilton won from pole last year and is driving with more assurance and maturity than at any time in his career, leaving even a revitalised Bottas, in the same machinery, struggling to keep pace. The Finn has won twice this year. PHOTO: AFP

LE CASTELLET: Lewis Hamilton will seek to stretch his lead and extend Mercedes unbeaten run to 10 races with a victory unaided by fortune at this weekend’s French Grand Prix.

The defending five-time drivers’ champion, a lucky winner in Canada two weeks ago when Ferrari’s Sebastian Vettel was controversially penalised, won at the remote sun-baked Le Castellet track last year and is hunting his sixth win this year and the 79th of his career.

If he, or teammate Valtteri Bottas, succeeds, it will mean the Silver Arrows have won all eight contests this year after finishing last season with two triumphs.

Hamilton says Lauda was a ‘bright light’ in his life

But after a testing weekend in Montreal, where four-time champion Vettel claimed pole position and finished the race first ‘on the road’, Hamilton and Mercedes are wary of any signs of complacency.

Team chief Toto Wolff admitted: “Canada was something of a wake-up call for us. After a run of very good reliability over the opening six races, we experienced a number of problems almost all of which were of our own making.”

He said the team would learn from their problems and thanked Mercedes mechanics for their excellent work.

“We expect another tough fight in France,” he added. “The circuit features some similarities to Montreal and the long straights will present a challenge for us. “But unlike Canada, the corner characteristics are spread across a range of speeds, which should play to our advantage. We’re looking forward to the chance to put a few things right again.”

Hamilton won from pole last year and is driving with more assurance and maturity than at any time in his career, leaving even a revitalised Bottas, in the same machinery, struggling to keep pace. The Finn has won twice this year.

Ferrari showed clear signs of their own awakening in Montreal where the power-hungry nature of the circuit suited their engine power, but Mercedes hope to match them and draw level with McLaren’s run of 11 successive triumphs in 1988.

The Italian team claimed victory and lodged notice of an appeal against the outcome following the race in which a five-seconds penalty, for the manner in which Vettel rejoined after running off across a grass strip.

They later withdrew that appeal notice, but have subsequently sought a review of the stewards’ decision, citing new evidence to follow.

Hamilton goes into the race with a 29-points lead over Bottas and 62 on Vettel who is due to arrive in France with an improved Ferrari.