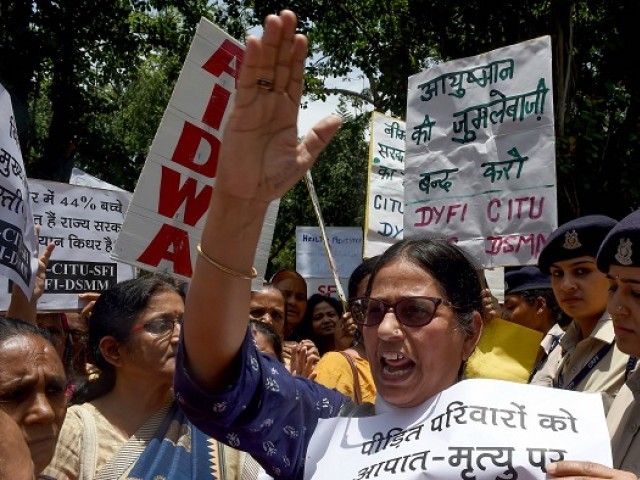 An Indian women activist shout slogans during a protest against the deaths of more than 100 children in Muzaffarpur. PHOTO: AFP

PATNA: Angry protests erupted in one of India’s poorest states on Tuesday over the deaths of more than 100 children from a mysterious brain fever potentially linked to lychees.

So far this month 103 children, mostly under 10 and malnourished, have died from Acute Encephalitis Syndrome (AES) in the Muzaffarpur area of the eastern state of Bihar.

The toll may rise with dozens more children undergoing treatment in packed hospital wards, where television pictures showed several children to a bed.

On Tuesday, dozens of people gathered outside the main hospital in Muzaffarpur to accuse local authorities of acting too slowly and of not caring.

The state’s health minister came in for particular flak after asking reporters about the score in India’s cricket match against Pakistan on Sunday during a news conference on the crisis.

“Children are dying because of a lack of medicines and treatment,” she tweeted.

Bihar Chief Minister Nitish Kumar was due Tuesday to visit the state-run Sri Krishna Medical College, where most of the children have died.

Media have been barred from entering the facility and the families of sick children asked not to crowd the premises.

AES sets in rapidly and is characterised by plummeting blood sugar, high fever, convulsions and paralysis. Its causes include viruses, bacteria and toxins transmitted in different ways.

Outbreaks have occurred annually during summer months in the same districts since 1995, typically coinciding with the lychee season.

Apart from 2014 when a record 150 children died, the annual death toll is usually much lower.

Several years ago US researchers said the brain disease could be linked to a toxic substance found in lychees, the tropical fruit.

They also said more study was needed to uncover the cause of the illness, known locally as Chamki Bukhar, which is fatal in a third of cases.

The National Human Rights Commission has asked Prime Minister Narendra Modi’s government — as well as Kumar’s state authorities — to say if there had been a “possible flaw” in implementation of vaccination and awareness programmes.

An editorial in the Hindu newspaper on Tuesday said the deaths could have “easily been prevented with some foresight and early care”.

It said in 2014 an Indo-US expert team had saved 74 percent of sick children through a simple medical intervention.

“It is appalling that this year the government failed to raise awareness on this strategy.”

Bihar is one of India’s poorest states and home to almost 100 million people. It has also been hit by a heatwave in recent weeks with temperatures of 45 degrees Celsius (113 Fahrenheit).

Most of the children affected by the brain fever belong to poor families who struggle to get even a square meal and often gorge themselves on the free-growing lychees on an empty stomach.