It remain­s to be seen whethe­r India has the wherew­ithal to become a region­al power
By Durdana Najam
Published: June 18, 2019
Tweet Email 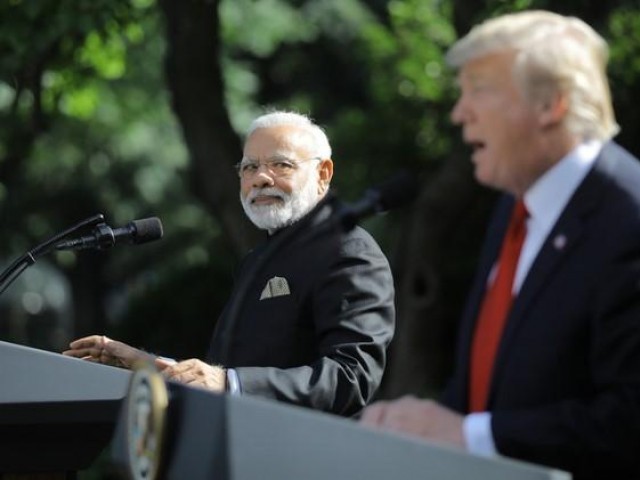 The South Asian political structure has been carved as much from the elements of colonial policies as from the alliances with the militarily and economically strong states, such as the US, Russia and now China. Post World War II, South Asia has been at the centre of international politics. It was here that the Cold War was fought and brought to an end. It was here that the war on terrorism began and seems to remain on the radar for unforeseeable future. It was there that China established its Blue Chip Project, the China-Pakistan Economic Corridor (CPEC), a strategic part of the Belt and Road initiative.

Pakistan, because of its geographical positioning in the region, happened to be an integral part of all these three developments. A resource-deficit country, with a Machiavellian neighbour at its eastern border, who had played a deceiving role in its breakup during the 1971 civil war, Pakistan could not have refused standing with the US in its wars in the region.

However, post-9/11, the US, as compared to Pakistan, drew closer to India, through different defence agreements and pacts, to subvert China’s rising influence. This strategic partnership between the two fed into the sense of entitlement India have had towards the region. In the manifestation of this hegemony, India would provoke the Madhesis of Nepal to seek changes in its constitution; cross over into Pakistan’s settled area of Balakot, in a complete disregard of the internationally-recognised Line of Control (LoC), to seek out terrorists; enter into a standoff with China at Doklam Plateau, apparently to shield Bhutan; begin constructing airport at the disputed land of Hollings in Partum Pare district of Arunachal Pradesh; compete with China in the ‘politics of corridors’ by entering into the International North-South Transport Corridor (INSTC) agreement. It will connect India with Russia, Central Asian countries, and Nordica and Arctic region. This corridor is being dubbed the Indian version of the BRT project.

Earlier, to erode CPEC’s influence and to damper Afghanistan’s dependence on Pakistan for its trade, India has invested in the Chabahar port in Iran. India’s effort to build hydropower dams along rivers in Afghanistan that flow into Pakistan and Iran is another step towards raising India’s strategic importance in the region.

Previously, India had unilaterally made ineffective the South Asian Association of Regional Corporation (Saarc). Pressures were applied on Bangladesh, Bhutan, Afghanistan, Sri Lanka and the Maldives in 2016 to not attend the conference, because it was being hosted in Pakistan.

Last but not the least, India has joined hands with the Afghanistan’s intelligence agency, the National Directorate of Security, to destabilise Pakistan through supporting insurgency in Balochistan and lately by helping the Pashtun TahaFfuz Movement gain traction.

No wonder US Secretary of States Mike Pompeo in 2017 said, “We fully support India’s rise as a leading global power.”

However, that was in 2017. That was when India had not figured in the US list of candidates for the trade war. Today, India is in the crosshair of Donald Trump’s angst that sees the US a victim of unfair trade deals both with its allies and others.

The White House has removed India from the list of Preferential Trade Benefit. India has been exporting goods worth six billion dollars under the agreement, according to the Congressional Research Service.

The psychological effect of this decision far exceeds its economic cost to India. The optics of yanking benefits from an ally could send all the wrong signals, about the future of the US-India strategic partnership, especially in the context of India’s desire to affront China in the contest of regional power.

Revamping trade policy has been one of Trump’s election promises, to move the US from the periphery to the centre stage of political economy. With just over a year to go until the next US presidential election, Trump may not be relenting, any time sooner, on his trade policy with India.

Putting India in this tight slot, designed only for the opponents such as China and Mexico, could be read as India being used as an instrument of geopolitics to further the US interest in South Asia with an aim to contain China.

Like Trump, Modi has come to power on the wave of nationalism, therefore, any optic that puts India in a suboptimal position may not go well with the newly-installed BJP government. It will be interesting to see how India adjusts its tariffs and protectionist measures to realign with the US in the new scenario. It remains to be seen whether India has the wherewithal to become a regional power, leave alone global power, sans the US backing; and whether this new shift in the US-India relation will have an effect on India’s posturing — an archrival vying for power — towards China.

I reached out to talk about these issues with Dr Syed Qandeel Abass from the School of Political Science and International Relations of Quaid-e-Azam University, “I doubt that India has reached the stage where, independent of the US, it could assert the debonair of a global leader. One example of it has been India’s compliance to the US decision to remove waiver to trade with Iran. It will be a chore for India to divert the fulfillment of its energy needs away from Iran. Yet, India has agreed. It was in this context that Iran had offered to link Chabahar with Gwadar.

“To offset US and India’s influence, a new block comprising Russia, China and Iran is emerging in the region. Pakistan should become part of this block immediately.

“The US will do everything, and for that India would be handy, of course, to sabotage the CPEC project. This is also in the favour of India. That is where the US and India meet for a common goal.

“Pakistan has to move away from the politics of reaction and become proactive, which will help the country in shedding the enigmatic India-centric foreign policy option.”