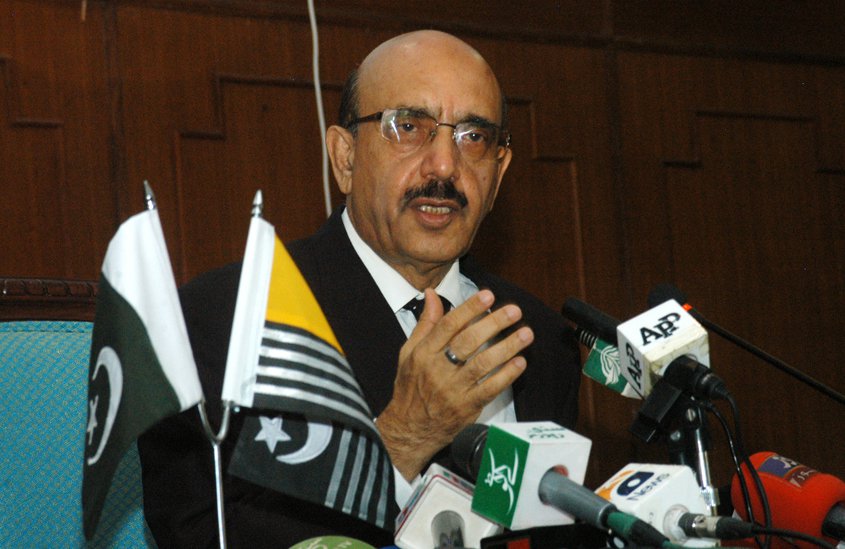 MUZAFFARABAD: Azad Jammu and Kashmir (AJK) President Sardar Masood Khan said here on Wednesday that hectic efforts are being made to ensure a consolidated struggle for the liberation of occupied Kashmir from Indian clutches.

Talking to a delegation headed by AJK Minister for Information and Tourism Mushtaq Minhas, which called on him at the Presidency, he said the freedom movement in Indian Occupied Kashmir (IOK) was gaining momentum as Kashmiris were determined to take their struggle to its logical end.

Masood Khan also said on the occasion that all-out efforts were being made to utilize in the liberation struggle the capabilities of educated Kashmiri youth settled in Europe and the United States, adding that a consolidated liberation movement was the dire need of the hour and that the people of Jammu and Kashmir remained committed to their just demand for the right of self-determination.

He termed the invitation extended to the AJK president along with other heads of state to the recent Organization of Islamic Co-operation (OIC) summit conference in Makkah Mukarramah an important development which had provided an opportunity to directly plead the cause of the Kashmiri people in the OIC summit conference, the Kashmir Contact Group and the OIC Foreign Ministers Council. He predicted it would have far-reaching positive results in the future and would provide the Kashmiri people a forum to highlight their case on the international level.

He asserted that the entire world, except India, was convinced that Kashmir was disputed territory whose future destiny was to be determined through an impartial plebiscite in the state.

He especially appreciated Mushtaq Minhas for remaining active on the media front and highlighting the Kashmir issue with missionary zeal and spirit before entering politics, adding that Minhas’s ability to develop his electoral constituency was also impressive.

Members of the delegation noted on the occasion that, since the assumption of the office of AJK president, Sardar Masood Khan had made continuous efforts to convince the international community that regional and global peace and security would remain in jeopardy until the Kashmir issue was resolved as per the wishes and aspirations of the Kashmiri people.

Besides, they observed, Sardar Masood Khan had introduced the new vision and strategy of involving university and college students of the liberated territory in the freedom movement and also acquainting them with the modern sciences.