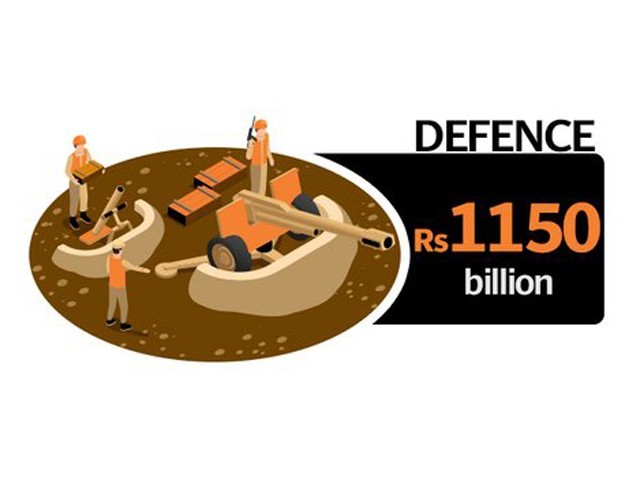 ISLAMABAD: The federal government on Tuesday proposed a 4.7 per cent increase in the defence budget despite earlier announcement that the military spending would remain unchanged as part of the overall austerity drive.

The budget document shows that defence outlay for 2019-20 would be Rs1,152 billion compared to Rs1,100 billion earmarked for the ongoing fiscal year.

However, when compared to the last few years during which defence budget grew by average 11% annually, the current raise is nominal. Also defence spending comes down to 27% from 31% in terms of the total size of the federal budget 2019-20.

The military would also get Rs65 billion for security expenditure related to temporarily displaced persons in the erstwhile tribal areas and another Rs30 billion for the UN peacekeeping force.

Taking into consideration all these expenditures, the total defence budget for this year in reality is Rs1,882 billion compared to Rs1,694 billion, showing an overall 11 per cent increase.

According to the budget document 2019-20, out of that Rs1,152 billion, Rs450 billion has been allocated for employees related expenses, Rs264.5 billion for operating expenses, Rs315 billion for local purchases and import of arms and ammunition and Rs123 billion for civil works.

On the eve of Eid, Prime Minister Imran Khan took to Twitter to announce that the military had ‘voluntarily agreed’ not to take any raise in the defence budget because of the current economic situation of the country.

He said the funds to be saved from defence budget would be utilised for the development of former tribal areas in both Khyber-Pakhtunkhwa and Balochistan.

Army Chief General Qamar Javed Bajwa confirmed the decision and said the freeze on defence spending would be for one year.

The army, however, clarified that the voluntary cuts in the defence budget for a year would not be at the cost of defence and security.

Defence spending has always been the subject of discussions with some seeking greater transparency and open debate about the military’s budget.

In recent years, the government provides more details about the defence budget. However, there has never been open debate within the Parliament on the subject.

Apart from fighting militancy, Pakistan’s defence spending is Indian-centric given the animosity between the two nuclear-armed neighbours.

The two countries were on the brink of a war in February when India sent its fighter jets inside Pakistan following the Pulwama attack. The Indian incursion invited a tit for tat response from Pakistan.

The Pakistan Air Force (PAF) jets locked several targets inside India but dropped the missiles in empty spaces in order to show that Pakistan had the will and capacity to hit back.

India earlier this year raised its defence spending by around 7 pe rcent. However, the size of Indian defence budget is six times bigger than the total outlay of Pakistan’s defence.