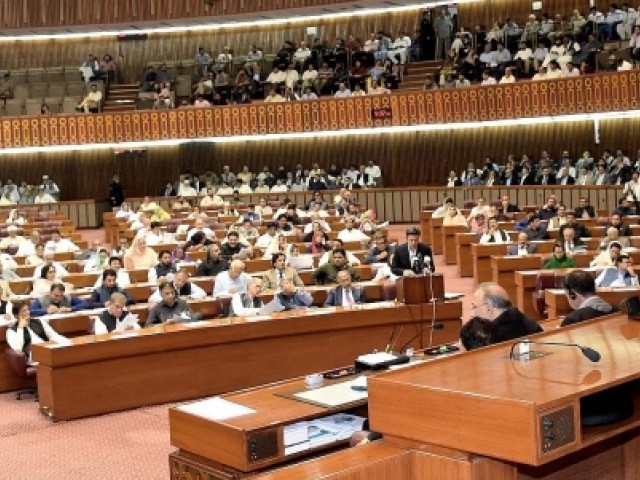 One of the busiest news days of the year concluded with the presentation of the federal budget in the National Assembly, and the federal government did its part to represent the whole country. While the morning’s arrests may have caused pain to specific groups of Pakistanis, the budget hit every citizen equally, with no discrimination based on political beliefs.

The anti-poor nature of the Rs7 trillion budget — carrying a deficit of Rs3.137 trillion — can be summed up in the federal excise duty (FED) imposed on one single item — cooking oil. The duty has been increased to an astounding 17 per cent. Besides, taxes on powdered milk, cream, and a host of other food items of common use have also been increased. In much of the world, items considered basic groceries are tax-exempt because such taxes have a crushing impact on the poorest of the poor. After all, everyone, rich or poor, needs to eat. Various food items are already subject to sales taxes if bought at larger grocery stores which accept electronic transactions. Instead of cleaning up one of the more muddled sections of taxation rules, the government has not only increased the cost of living, but it has also increased the cost of surviving.

But what was to be expected when a day earlier, even the de facto finance minister, Abdul Hafeez Sheikh, presented the Economic Survey of Pakistan for the previous year without making any reference to its contents? He, instead, blamed the opposition for the country’s economic woes and yet had nothing good to highlight from the PTI’s first year. Economic growth this year was just 3.3 per cent against a target of 6.2 per cent — barely half the target. The growth target for the next year is just four per cent. This is especially worrying, given that Pakistan seldom meets its growth target. For comparison, the previous PML-N government had 4.1 per cent growth in each of its first two years.

As for revenue generation, the PTI’s Plan A was that people would voluntarily pay their taxes once the party came to power. That didn’t happen. But, still in la-la land, it seems they now think the tried and failed strategies of their predecessors will succeed. Attempting to offer up Purana wine in Naya bottles is one thing, but the bigger problem is, the wine went bad a long time ago.

Almost a trillion rupees went into the pockets of the rich through various tax exemptions, while over 61 per cent of revenue generation came through sales tax collection. The government has proposed cutting some of these exemptions, but the oversimplified manner in which it was presented may be cause for concern rather than optimism. Using the existence of bank accounts — sans their contents — to estimate the potential tax base does not generate confidence.

Although lower grade government officials and pensioners have been given reasonable raises of 10 per cent, the pay raises of five per cent for government officers in grades 17 through 20 are not even enough to keep up with inflation, while senior bureaucrats have been denied raises altogether. But at least, as a token, they cut the salaries of National Assembly members by 10 per cent.

Revenue Minister Hammad Azhar also claimed that the government reduced the trade deficit, while remittances increased by $2 billion, and the current account deficit dropped by $4 billion. There was also the related matter of over $9 billion in loans from China, Saudi Arabia, and the UAE.

Interestingly, or worryingly, depending on one’s opinions on facial hair, the government appears to have shaved the customs duty on steel for razor manufacturing businesses from 11 per cent to five per cent.