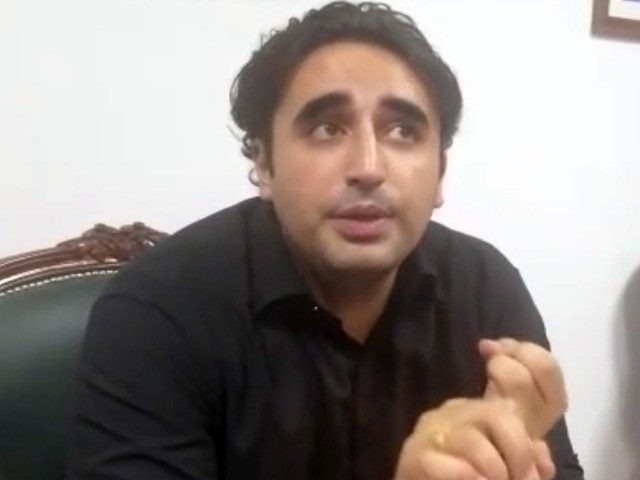 ISLAMABAD: Expressing displeasure over what he described as an ‘anti-people’ budget, Pakistan Peoples Party (PPP) Chairman Bilawal Bhutto-Zardari on Tuesday said his party would try its best that the Federal Budget 2019-20 does not get passed by the National Assembly.

Speaking to reporters, he said the opposition resorted to protest during Minister of State for Revenue Hammad Azhar’s budget speech in the lower house of parliament after realising that masses are being burdened with more taxes.

Bilawal said the recent arrests of the elected representatives were made in a bid to divert attention from the ‘anti-people’ budget.

“Our first demand was issuance of production order for [PTM MNAs] Mohsin Dawar and Ali Wazir and [PPP co-chairman] Asif Ali Zardari and [PML-N leader] Khawaja Saad Rafiq, but the [NA] speaker did not issue production orders in clear violation of democratic norms and traditions,” he added.

The PPP chief said that the government hastily presented the budget, adding that the members of the opposition benches were not even given copies of the budget. “We still attended the budget speech and resorted to protest when we realised that people were being burdened with more taxes,” he explained.

“We will try our best that this anti-people budget does not get passed [in the National Assembly].”

“History will record how Imran ‘danced’ as our economy burns.”

Today the PM of Pakistan danced on the floor of the house as his ministers introduced a PTIMF budget that increases taxes, inflation & unemployment. History will record how Imran danced as our economy burns.

Commenting on the ruling coalition, the PPP chairman said the genuine demands put forth by Balochistan National Party (BNP) chief Akhtar Mengal were yet to be implemented despite their noble gesture of not accepting any ministries. “PPP supports his demands … Akhtar Mengal must join hands with the opposition,” he added.

Commenting on the ongoing accountability drive in the country, Bilawal reiterated that the National Accountability Bureau’s law is a black law. “It is an institution established by Musharraf. NAB’s law does not deal with accountability and only meant for political victimisation.”

Terming the recent arrests as ‘political vendetta’, Bilawal said that the anti-corruption watchdog sprang into action only after attempt to form a ‘selected government’ had failed in Sindh.

The PPP leader vowed to follow legal proceedings if the National Assembly speaker and deputy speaker did not step down from their posts.

Bilawal had demanded their resignations for not allowing him to speak on the matter, hours after his father was arrested by the NAB team in the fake bank accounts case on Monday.

He said that the speaker had assured him full cooperation in this regard. However, none of the arrested lawmakers attended the all-important budget session in the lower house today.