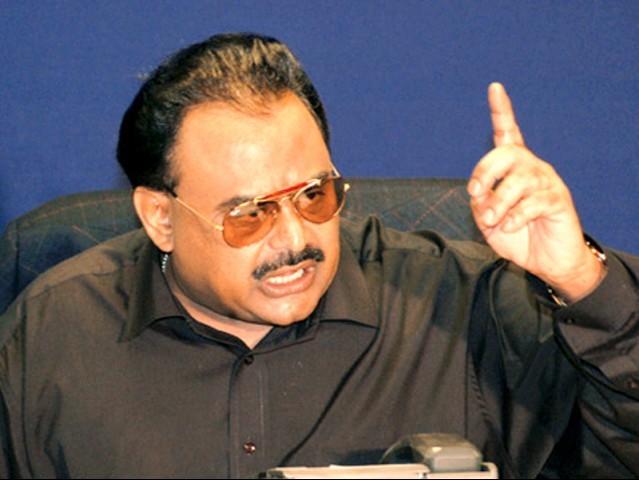 The Metropolitan Police of London arrested Muttahida Qaumi Movement (MQM) founder Altaf Hussain on Tuesday as part of an investigation into provocative speech three years ago in which he urged his followers to “take the law in their hands”.

The Scotland Yard said in a statement that a man in his sixties had been arrested after a joint investigation with Pakistani authorities “in connection with … a number of speeches made by an individual associated with the Muttahida Qaumi Movement (MQM) in Pakistan”.

The statement did not identify Hussain by name but BBC Urdu quoted Hussain’s spokesman Qasim Raza as confirming that he had been taken in for questioning. Geo News also reported that on the authority of it sources that the MQM founder had been arrested.

The MQM leader was “arrested at an address in northwest London”, according to the Met police statement. “He was detained under PACE [Police and Criminal Evidence Act 1984] and taken to a south London police station, where he currently remains in police custody,” the Yard said.

The MQM founder had delivered a fiery speech via telephone to a party gathering outside the Karachi Press Club (KPC) on August 22, 2016 after which party workers chanted anti-Pakistan slogans and then vandalised a media office nearby.

“The investigation, which is being led by officers from the Met’s Counter Terrorism Command, is focused on a speech broadcast in August 2016 by an individual associated with the MQM movement in Pakistan as well as other speeches previously broadcast by the same person,” said the statement.

“He was arrested on suspicion of intentionally encouraging or assisting offences contrary to Section 44 of the Serious Crime Act 2007. As part of the investigation, officers are carrying out a search at the northwest London address,” the Met statement continued.

Section 44 relates to ‘Intentionally encouraging or assisting an offence’ or intending to encourage or assist in the commission of an offence. The PACE codes of practice regulate police powers and protect public rights, according to the British laws.

The Met said detectives are also searching a separate commercial address in north-west London. The British police added that throughout the investigation, a police team from the UK “have been liaising with Pakistani authorities in relation to our ongoing enquiries”.

In April, a police team from London visited the FIA headquarters in Islamabad to record the statement of six witnesses of the Sindh police in the hate speech case against Hussain. However, the officers could not make it to Islamabad.

According to Geo News, 15 officers took part in a dawn raid at Hussain’s north London home. “MQM sources have confirmed that Altaf Hussain was arrested,” the report said, adding that a forensic unit of Scotland Yard was searching the residence of Hussain and the MQM’s International Secretariat.

The news channel also reported that counsel for Hussain had submitted the bail request. Other media reports carried out a statement of issued by the MQM International Secretariat, which denied charges against Hussain.

Hours after Hussain’s incendiary speech in August 2016, MQM workers had attacked a TV channel’s office in Karachi. In the days that followed, the Karachi wing of the party led by Farooq Sattar distanced itself from Hussain and the London wing.

The interior minister at the time contacted the British authorities and asked them to take action against Hussain for “inciting people of Pakistan to violence”. In 2017, Scotland Yard sent a letter under ‘Mutual Legal Assistance’ to Pakistan in relation to two speeches made by the MQM founder on March 11, 2015 and August 22, 2016.

Hussain, 65, lives in self-exile in London for more than two decades. He requested asylum in the 1990s and later gained UK citizenship. The Pakistani authorities have repeatedly demanded action be taken against him for inciting people in Pakistan.