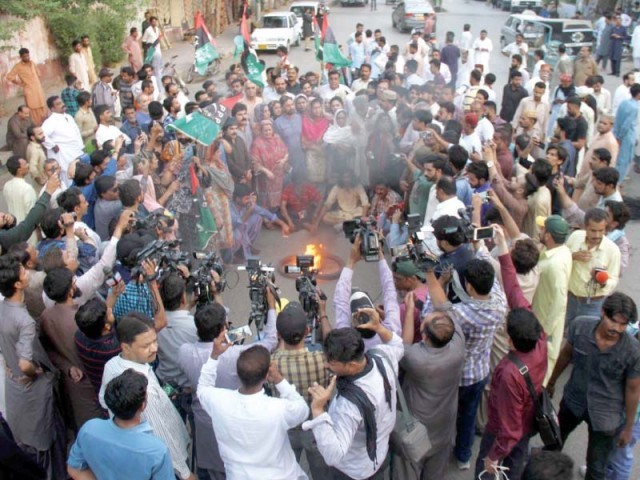 KARACHI: Pakistan Peoples Party (PPP) leaders and workers protested against the arrest of Asif Ali Zardari and announced  ‘black day’ today (Tuesday) in Sindh.  Soon after the news of Zardari’s arrest, the activists and workers of the party took to the streets in various towns and cities of the province.

“Despite the unfair trial of our leaders, we believe in the supremacy of law and place our trust in the courts,” PPP Sindh President Nisar Ahmed Khuhro said adding that PPP would not succumb to pressure and its leaders are ready to render sacrifices.

On the other hand, the statement issued by PPP Sindh chapter said that they would observe ‘black day’ in the province today (Tuesday) and party members wearing black armbands would come out on the roads protesting against the victimisation of PPP co-chairperson Asif Ali Zardari.

A large number of PPP workers gathered outside the Karachi Press Club (KPC) and criticised National Accountability Bureau (NAB) for opening fake cases and arresting their leader.  Around half a dozen provincial ministers and a few MPAs and MNAs also joined the protest organised by the PPP youth wing.

The CM, however, appealed to the enraged PPP workers to avoid blocking the roads and not to create a law and order situation in the name of protest. “Peaceful protest is everyone’s right and PPP believes in non-violent struggle. We can’t tolerate the sit-ins and damages to government offices,” said Shah adding that no one can forcibly shut the shops or markets and that he would not tolerate such behaviour. He said that the provincial government would take strict action if anyone was found involved in it.

Meanwhile, Sindh Assembly Deputy Speaker Rehana Leghari has summoned the assembly session on June 12. The session has been called on the application submitted by PPP MPA Nida Khuhro, Shadia Javed and Ghanhwar Isran. Sources privy to the development told The Express Tribune that resolution would be passed against the arrest of Zardari and PPP members would protest against NAB and Pakistan Tehreek-e-Insaf (PTI) government.