Budget to facilitate the downtrodden: Firdous

Budget to facilitate the downtrodden: Firdous

Says effort­s will be made to put minimu­m burden on the common man
By Our Correspondent
Published: June 9, 2019
Tweet Email 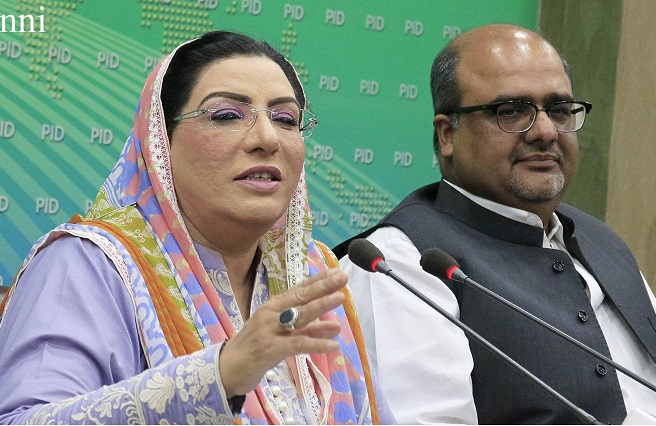 ISLAMABAD: Special Assistant to Prime Minister (SAPM) on Information and Broadcasting Dr Firdous Ashiq Awan has said the uplift of downtrodden segments of society was top priority of Pakistan Tehreek i Insaf (PTI) government in its first federal budget 2019-20. The budget is scheduled to be presented on June 11.

Addressing a news conference here on Sunday, Firdous said that the budget will be austerity-oriented and public-friendly and efforts will be made to put minimum burden on the common man.

The special assistant maintained that it will be incumbent government’s first budget that has been prepared by engaging an economic team and keeping in view national requirements. She said the country needed a sustainable economy that takes care of everybody.

She said time and again Prime Minister Imran Khan assessed and evaluated the budget documents and gave top most priority to ensure well-being of weaker segments of society.

The special assistant noted that the premier was likely to share the government priorities with the nation and media soon and that this budget will be PTI government’s long-term roadmap and way forward to achieve next five-year targets, which would also be reflective of its manifesto.

She pointed out that the country was passing through difficult economic situation and facing a number of challenges on the financial front. She urged all the government departments, ministries and divisions to curtail unnecessary expenditures.

The special assistant lauded the country’s armed forces by setting a precedent of taking voluntary cuts in the defence budget.

“The trend was first set by the Pakistan Army. They froze their annual [budgetary] increase. They decided that the officers placed on high ranks will not avail increased perks, privileges and salaries and that the budgetary benefits will be transferred to their lower ranking officers of up to Grade 16.

She reiterated that the government and prime minister were fully aware of the defence needs of the country.

“Our ignorant opposition is raising a hue and cry that we may have risked the country’s national security with this initiative. In no way is the government of Pakistan and the prime minister oblivious to the nation’s defence requirements. The prime minister as well as the chief of Army staff have decided in consultation with one another that the foregone increase in defence budget shall be spent on the development of the merged tribal areas,” said Awan.

She maintained that the common man living in the tribal areas, who “stands together with the army and kisses our flag” will be made a shareholder in all developmental efforts in the region.

The special assistant said that the funds that would have been apportioned for the defence institutions shall now be spent on the under-developed areas of Balochistan so they may have good schools, improved healthcare facilities and better infrastructure.

The special assistant said that the premier had directed the Khyber Pakhtunkhwa government to make the peace-loving and patriotic tribesmen part of national development as they had rendered innumerable sacrifices for the country and stood with the armed forces in difficult times.

Firdous paid tribute to the armed Forces for defending every inch of the motherland and sacrificing their lives while purging the country of terrorists, calling them ‘national heroes’.

She strongly condemned the terrorist attack on a military vehicle in North Waziristan in which three army officers and a soldier embraced martyrdom.