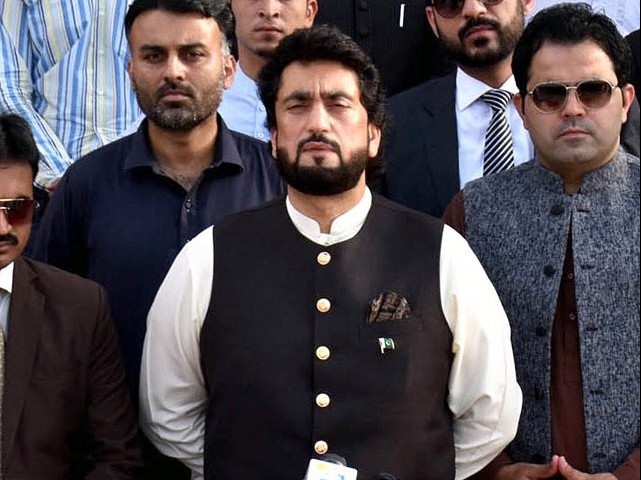 KOHAT: Minister for Safron Shehryar Afridi has vowed to protect Pakistan’s geographical boundaries, territorial integrity and national unity, saying no one will be allowed to cross “our red lines”.

Addressing a festivity at the Ghamkol Sharif Afghan Refugees Camp on the third day of Eidul Fitr on Friday, the minister said, “Pakistan, through thick and thin, has generously hosted over four million Afghan refugees for the last four decades.”

The ceremony began with the Pakistan and Afghanistan national anthems. Children performed a special play to showcase the kind and generous hospitality offered by Pakistan to the war-affected refugees.

Addressing a congregation of Afghan leaders, the minister said despite having separate identities and history, Pakistan and Afghanistan had defeated foreign occupation forces.

“During the past four decades, Pakistan passed through different phases. We suffered on the economic front but never passed this financial impact on to our generous support to our Afghan guests,” said Afridi. “We don’t need anything in return for our generous hosting of Afghan refugees. We just want Afghans to respect our territorial integrity and geographical boundaries which are our red lines. Respect our national flag which is the symbol of our pride. And respect the sanctity of our federating units – Punjab, Khyber-Pakhtunkhwa, Sindh, Balochistan, Azad Jammu and Kashmir and Gilgit-Baltistan. We don’t ask you for anything else in return for this hospitality.”

The minister said that anyone pointing fingers at Pakistan could never be a friend of neither Pakistan nor Afghanistan, adding that Pakistan, since 1979, had sacrificed its own kids, but fed the Afghan refugees generously.

“We shared our bread and butter with you. We shared our resources, our businesses, our homes and even got our sons and daughters married with you. This is a 40-year history of brotherhood and sacrifices and the history has no parallel to this bond. Now we ask you to please never allow any enemy to raise fingers at Pakistan,” the minister said.

Afridi said Prime Minister Imran Khan had set another precedence of refugee mainstreaming by allowing Afghans to open bank accounts in Pakistan and do official businesses here. He vowed to resolve any issue being faced by Afghan refugees on a priority basis.

On the occasion, the Afghan leaders assured the minister of their full support and cooperation in respecting Pakistan’s red lines.