The trials of tribal journalists

The trials of tribal journalists

Since 2005 to date, nine journa­lists have lost their lives report­ing from the tribal areas.
By Said Nazir
Published: July 3, 2011
Tweet Email 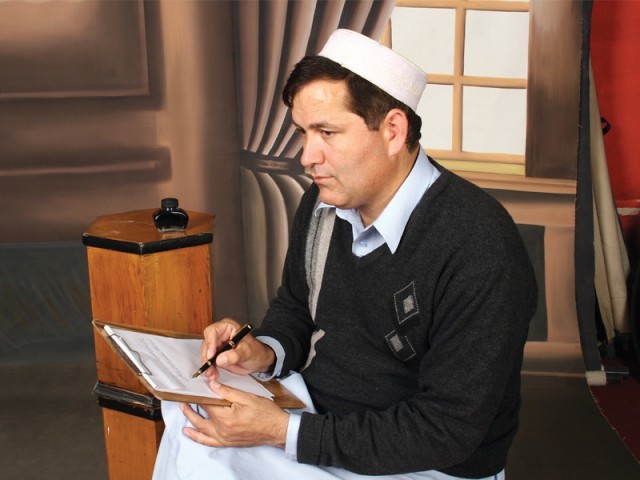 “Please give up your job … it is so dangerous, I don’t want to see your wife widowed and your children orphaned. Look at what risky journalism did to us,” pleads the wife of slain tribal journalist Nasrullah Afridi.

On May 10, 2011, Afridi was killed when a bomb planted under his car exploded in Khyber super market in the Cantonment area in Peshawar. Afridi, 40, was reporting from Bara Tehsil Khyber Agency, and had been working for the Urdu-language paper the Daily Mashriq and for state-run television, since 2001.

Afridi had been threatened countless times, but he brushed away suggestions that he should leave the profession. “My father used to tell my mother: ‘I may leave you but I will never leave my job’,” says Afridi’s elder son, Ihsanullah. Ultimately, Afridi did leave his family for good, leaving behind a wife, three daughters and three sons, his mother, father and three sisters.

Afridi was not the only journalist in the tribal areas who had to frequently face threats. “My father often asks me to change jobs but the thrill of journalism prevents me from doing that,” says Noor Haleem, a reporter for an Urdu-language newspaper based in Khyber Agency.

“When I leave for work in the morning my wife advises me to stay away from the press club, she thinks it will be hit by militants at any time,” says journalist Mashtaram Khan from Mohmand Agency.

Since 2005 to date, nine journalists have lost their lives reporting from the tribal areas.

Warring tribes and militant groups have little tolerance for the media, and this is the reason that 30 per cent of tribal reporters out of 230 journalists registered as members of the Tribal Union of Journalists (TUJ) have chosen to flee and settle in districts of Khyber-Pakhtunkhwa, says TUJ president Safdar Hayat. He himself has migrated from North Waziristan to Peshawar and lives close to Afridi’s house in Hayatabad.

Hayat says that anyone who attempts to delve deep into militancy and military operations will ultimately be silenced. He adds that the death of Afridi in the highly protected cantonment area of Peshawar just adds to the insecurity journalists feel.

But how do journalists, in the process of seeking the truth, end up enmeshed in deadly activities in the first place?

In Afridi’s case, he had had an uneasy relationship with Khyber Agency-based banned outfit Lashkar-e-Islam, led by warlord Mangal Bagh, since its inception in 2006.

Back on February 24, 2006, Afridi and Khyal Math Shah (from the Daily Surkhab) reported that militants from Lashkar-e-Islam launched an assault against its rivals, led by Pir Saif-ur-Rehman. This enraged the founder of LI, Mufti Munir Shakir, who directed his followers through his illegal radio channel to boycott reading the Daily Mashriq and Daily Surkhab. He also banned sales of both papers in Bara tehsil, where the LI has established its own writ. Mufti branded the reporters ‘anti-Islamic’ and closed the petrol station Afridi owned.

He also told the reporters that unless they apologised for their reports, their papers would continue to be banned. The journalists ultimately capitulated and apologised to Mufti. The monitoring organisation Reporters Sans Frontiers protested against the incident and demanded that the government protect the journalists, but nothing came of this.

On the 16th of the following month, Afridi and Qazi Rauf published a story about a murder that the LI was allegedly responsible for, in their respective papers the Daily Mashriq and Daily Express. The story contradicted the LI’s claim that the deceased was a thief, which infuriated Mangal Bagh. Through a radio broadcast, he told the reporters he would attack their homes if they did not stop reporting against the banned organisation. So on March 17, the two journalists submitted a surety bond of Rs1 million through local councillor Haji Ikhtiar Shah, and said they would not file stories about the group any more. The media protested against this, but again, nothing came of their protests.

On May 21, 2006, The News published a story stating that one of Mangal Bagh’s sons was studying in a school run by the Frontier Corps inside Mehsud Scouts fort in Sordand area of Bara tehsil in Khyber Agency. The journalist who was associated with The News as a correspondent in Khyber Agency said the story irritated the then commandant of the Mehsud Scouts, Mehmood Raza Changezi, who shared the story with Mangal Bagh in a meeting on May 21, and told him that Afridi was behind the story. As a result, on May 22 Mangal Bagh issued a death warrant against Afridi through his illegal radio station, asking his militants to shoot Afridi wherever they found him.

At this time, Bagh also stated that Afridi’s petrol station should be closed for three years, and banned sales of the Daily Mashriq in the area for six months. This time, Afridi shifted his family from his hometown of Bara to Phase 6 in Hayatabad, Peshawar, in June 2006.

Then about a year later, on May 21, 2007, Afridi wrote a story alleging that LI militants had fired on security forces in Qamberabad area, injuring a police officer. LI rejected its involvement, and five days later a hand grenade was hurled into Afridi’s house in Peshawar.

After some time, Afridi bore the brunt of an attack on him by some fellow tribal journalists, who visited Tirah Valley in 2009 to see Mangal Bagh where they complained that Afridi was not following the LI’s orders, and they asked its chief to help make one of them a correspondent for The Daily Mashriq instead of Afridi.

The LI had also been blaming Afridi for siding with its archrival militant outfit, Ansarul Islam. His colleagues Sher Khan and Qazi Rauf from Khyber Agency disagree with this, saying that though Afridi had cordial relations with Ansarul Islam and he was a strong opponent of LI, he remained impartial while covering conflicts between the rivals. Afridi’s colleagues say that his main misstep was that he reported about the militant groups’ unlawful activities in an unbiased fashion.

On April 17, 2011, a press conference addressed by the leaders of Ansarul Islam was held in Peshawar in which they claimed that Mangal Bagh had fled to Afghanistan where he was working for anti-Pakistani forces. When this press conference was covered by local newspapers, Mangal Bagh was infuriated and thought the press conference had been organised by Afridi. He threatened Afridi through his shadow spokesman Muhammad Umer, say Afridi’s friends.

They say that colleagues and a Pakistani intelligence official had asked Afridi to lie low for a few months, but he didn’t take their concerns seriously. A month later, he was dead.

So far no militant group has claimed responsibility for his killing.

For journalists in tribal regions, self-censorship is the only way they can avoid the wrath of militant groups or state agencies. Those who do not practice self-censorship are in an extremely vulnerable position. “I have filed many stories which say things like, ‘unknown armed men kidnapped unknown persons and shifted them to an undisclosed location’ despite the fact that I knew the three Ws — who, what, when. But the parties involved do not want to be named,” says Safdar Hayat.

Hayat says that 80 per cent of tribal journalists are not paid by their respective media organisations, which contributes to the problem, and makes most of them morally corrupt or blackmailers. A lack of financial resources, education, training and tolerance on the part of security forces and militants were some of the main challenges for journalists covering the conflict in Fata, he adds. He says the law of Frontier Crimes Regulations and the non-extension of the Freedom of Information Act to Fata were the main hurdles in protecting journalists.

He says that tribal journalists are not aware of their own limitations or of national interest and this is why they become victims of the conflict in Fata. “So we request the ISI to give us an in-camera briefing like it gave to parliamentarians, which may help minimise threats to journalists,” he says.

Unfortunately for journalists like Nasrullah Afridi, it is already too late, and he has become another victim of a faceless criminal act.

The house that Sadat lived in