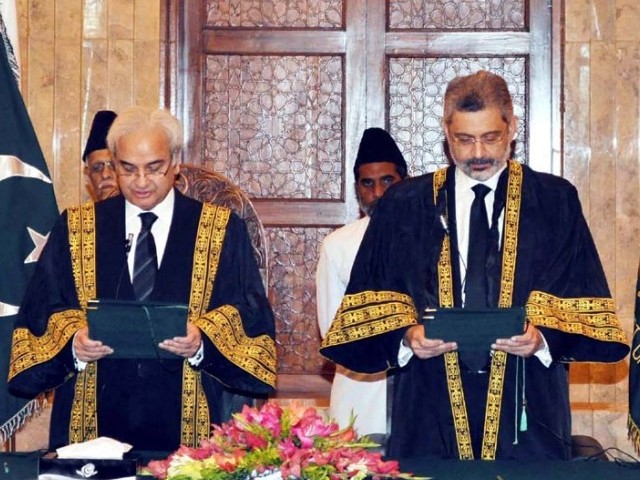 ISLAMABAD: Justice Qazi Faez Isa, who is facing the federal government’s complaint of misconduct, has remained in the news due to his strong dissent with fellow judges since his elevation in the Supreme Court in September 2014.

Justice Isa wrote dissenting notes in high profile cases such as the 21st amendment, the houbara bustard and on a matter related to the chief justice’s discretionary power to entertain public interest litigation. He also authored the judgment on the dismissal of National Accountability Bureau (NAB’s) appeal regarding the reopening of the Hudaibiya Paper Mills case against the Sharif family.

Once, Justice Isa was considered as close friend of former chief justices Iftikhar Mohammad Chaudhry and Jawwad S Khawaja.  In his 25-day tenure as CJP, Justice Khawaja and Justice Isa heard a number of public interest matters and authored judgments.

Soon after his retirement, Justice Anwar Zaheer Jamali took charge as the new chief justice. Justice Isa raised objection over the formation of a larger bench in houbara bustard case and exclusion of one judge, who was part of the bench, which cancelled the ban on hunting of houbara bustards in the country.

Justice Isa had authored an 11-page dissenting note against majority judgment. Interestingly, during the tenure of Justice Jamali, full-court meeting was held to consider names of a few lawyers for giving them status of senior advocate of Supreme Court.

During the meeting, unlike few senior judges, Justice Isa had strongly opposed to give status to those lawyers, who had supported ex-military ruler Pervez Musharraf’s November 3, 2007 PCO and emergency.

Later, the full court did not give status of senior advocate to those lawyers. It is learnt that name of incumbent Law Minister Dr Farogh Naseem was also mentioned in that list.

Likewise, Justice Isa remained in headlines during the tenure of ex-chief justice Mian Saqib Nisar. He raised serious questions over the manner in which public interest litigations were initiated by the Human Rights Cell of the top court.

He also expressed grave concern over the dissolution and reconstitution of a bench by former chief justice Mian Saqib Nisar at SC’s Peshawar Registry on May 8.

When the three-judge bench of the apex court, headed by the ex-chief justice comprising Justice Isa and Justice Syed Mansoor Ali Shah resumed hearing of the cases at Peshawar registry on May 8, a number of public interest matters were listed.

The bench took up the case of infectious hospital wastes in Peshawar. The file of the case consisted of two pages and was initiated by the director of the top court’s Human Rights Cell.

Due to lack of material in the file and to understand the origin of the case, Justice Isa inquired if the director was present in court so that the bench could examine the file (if any) containing the material (if any) on the basis of which he had written the note, and whether the original jurisdiction of the Supreme Court under Article 184(3) of the Constitution could be invoked.

He asked Advocate General Khyber Pakhtunkhwa Lateef Yousafzai, who was standing at the rostrum, to read Article 184(3).

Justice Isa had written in his note, “However, before Article 184(3) could be read, the Chief Justice intervened and said he would be reconstituting the bench and suddenly rose up”.

“The bench was then presumably reconstituted … I say presumably because no order was sent to me to this effect. However, a two-member bench did assemble later, from which I was excluded. This for me is a matter of grave concern.”

“In my humble opinion it is unwarranted and unprecedented to reconstitute a bench in such manner, while (it was) hearing a case. To do so undermines the integrity of the system and may have serious repercussions,” Justice Isa said in his note. Interestingly, his view was also endorsed by other member of the bench Justice Mansoor Ali Shah after passage of six months.

Though Justice Khosa in his Panamagate verdict endorsed Justice Isa’s jurisprudence about the applicability of Article 62 (1) (f) of the Constitution he (Justice Isa) disagreed with his view on the reopening of Hudaibiya Paper Mills case against the Sharif family.

Justice Isa had also authored the judgment on the dismissal of NAB’s appeal regarding the reopening of the Hudabiya Paper Mills case against the Sharif family.

Justice Isa disagreed with the view of CJP Khosa about the effects of compromise in criminal cases. He had urged then chief justice Saqib Nisar  to constitute a larger bench to examine whether compounding of an offence under Section 345 (CrPC) amounts to acquittal of an accused or not.

The controversy arose in March 2017, when Justice Qazi Faez Isa differed with the majority opinion on this point and said a compromise with the heirs in criminal matters ‘cannot affect the conviction’.

Later, then chief justice had referred the matter to the three-judge bench for giving a final opinion. Justice Khosa in the majority opinion said that the court appreciates the intensity and sincerity of the sentiment expressed by Justice Isa but could not agree with “his lordship so as to interpret the existing law in the light of some hypothetical possibilities in this world and retribution or redemption in the hereafter”.

However, the matter has yet to end as the two judges in a recent judgment, authored by Justice Isa had said that a number of provisions were not considered by the bench led by Justice Khosa in the judgment, and most probably because the requisite assistance was not provided by law officers.

Justice Isa raised serious questions over the jurisprudence evolved in view of Panama Papers verdict regarding the disqualification of lawmakers, calling upon the apex court to make every effort to dispel any impression that different persons are treated differently.

“Justice must not only be done, but be seen to be done as well. Every endeavour, therefore, should be made to resolve the prevailing legal uncertainty. The eligibility of members of parliament should be decided in accordance with one single and definite measure,” says Justice Isa in his 27-page dissent note.

He also raises seven questions while recommending that a full court settle uniform principles for the applicability of Article 62(1)(f) of the Constitution.

Justice Isa says that there are judgments of this court which apply the “principle or rule of strict liability” and hold that any nondisclosure or misdeclaration results in disqualification, giving the Panama Papers cases as examples.

Interestingly, Justice Isa has elaborated the Panama Papers case proceedings into three parts by highlighting discrepancies in the judgments. He has also reproduced the particular portions of each judge on the Panama bench to highlight their conflicting views on the applicability of Article 62(1)(f) of the Constitution.

He says once the facts of a case have been ascertained, the applicable law is applied to arrive at a decision. However, when the facts are clear, but different benches comprising the same number of judges take divergent views, the matter needs urgent resolution, he explained.

“Another question which requires determination is whether the matter of nondisclosure or misdeclaration is to be treated differently if the case is heard by the Supreme Court in its appellate jurisdiction (ROPA Section 67(3)), from a case heard by this court in its extraordinary original jurisdiction (Article 184(3) of the Constitution). There is yet another matter which needs to be considered and conclusively settled.”

According to the judge, Article 184(3) of the Constitution states that only matters of “public importance with reference to the enforcement of the Fundamental Rights” can be attended to by the SC unilaterally.

He also says that the scope of Article 225, which specifically deals with election disputes, also needs to be considered and whether on the principle of the ‘specific excluding the general’, this article excludes resort to Article 184(3) of the Constitution in respect of individual election disputes. And, to what extent, if at all, can an election dispute be categorised as a matter of “public importance” and which particular fundamental right stands infringed, which needs “enforcement”, he asked.

Justice Sheikh says that the law as laid down by the SC regarding Article 62(1)(f) is unequivocally consistent and well established, adding that it is the said principles of law which would require to be applied for fair adjudication.

“After having read the order authored by my learned brother Qazi Faez Isa, J, I find myself unable to append my signatures of concurrence thereto as it has been suggested that the decision of the instant Appeal be deferred till the questions as raised and enumerated by him are finally adjudicated by the Full Court,” says Justice Sheikh in his opinion.

Justice Sheikh also referred the judgments wherein all the questions by and large have been raised and Justice Isa also endorses the judgment law as enunciated in the judgment without the necessity of hearing by a full court.