Says the issue is being formal­ly taken up with BBC author­ities
By News Desk
Published: June 4, 2019
Tweet Email 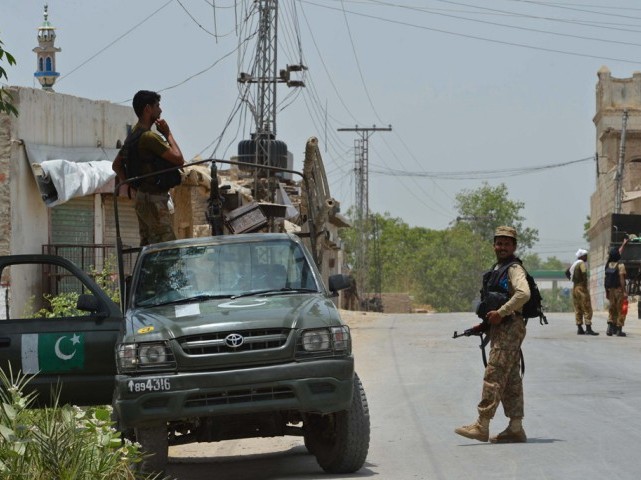 The Pakistani military has strongly rebutted a recent news report about alleged human rights violations in the erstwhile North Waziristan Agency as “a pack of lies and in violation of journalistic ethos”.

The operation had decimated the command and control centre and bomb-making factories of terrorists and purged the region of militants of all hues, re-establishing the writ of the state in the area which was called by the West as the “most dangerous place on earth”.

The BBC report is apparently premised on an ‘airstrike on January 22, 2014’ that had allegedly killed terrorist commander Adnan Rasheed in the Hamzoni area of Waziristan. However, it later transpired, according to the BBC, that the strike had allegedly killed the family of a local man who had his home blown to pieces.

The military’s media wing – the ISPR – said in a statement on Monday that the BBC report, which is based on ‘conjecturing’, tried to “implicate Pakistan Army without any proof”.

“The angling, spinning and credibility of the story are exposed from the fact that contrary to the published claim, the ISPR only received a judgmental questionnaire via email.

The ISPR said the BBC was offered full opportunity – even interaction to know the facts. The BBC team, however, never responded and did a “preconceived, conjectured story”.  “The story is void of the context and understanding of the prevalent environment at that time,” it added.

Referring to the alleged airstrike, the ISPR said the North Waziristan operation had yet not started when the so-called incident allegedly took place. The military had announced the launch of Operation Zarb-e-Azb on June 15, 2014 in North Waziristan which was “being used by terrorists to plan, coordinate and execute activities across the country”.

And ground troops moved into the area on June 30 after the local population had been shifted to the camps set up by the government for internally displaced persons (IDPs) in Khyber-Pakhtunkhwa.

“On an average 6-8 terrorist incidents per month were taking place across Pakistan targeting children, women, schools, churches and markets.  People were being slaughtered in the North Waziristan and terrorists were playing football with [their] heads. Local population was actually hostage to hardcore terrorists,” the ISPR said.

The BBC story, it added, lacks any credible and authentic source and merely relied on hearsay. The basis of the entire story about so-called strikes was unauthentic Jan 22, 2014 report of a private TV channel. The only source interviewed also didn’t point at anyone or talked about the strike or operation, it said.

It said the issue mentioned in the report is of North Waziristan whereas the activist quoted as source belongs to a particular group from South Waziristan.

According to the ISPR, the writer surely lacked knowledge of the environment, geography of the area, the ground situation, and about conduct of operations.

“The story remains ill intended, biased and part of a larger agenda. It also amounts to undermine Pakistan’s efforts for fighting global menace of terrorism and Pakistan’s unparalleled achievements in the war against terrorism contributing to regional peace.”

It said the people of Pakistan are well aware of the fake news phenomenon of all types and design behind such undertakings. The issue is being formally taken up with BBC authorities.

Before even filing the story and getting viewpoints from all stakeholders, the writer had titled his story ‘Pakistan Military guilty of human rights violations’ in his email sent to the ISPR. The ISPR had objected to this title and told him that the title was judgmental.

The writer of the article traveled all along to DI Khan district but never interacted with the ISPR to know facts.

According to a source, the writer’s sources are activists of the Pashtun Tahaffuz Movement (PTM) “working on vested interests and playing politics which has been denounced by the K-P Chief Minister chief minister who recently said only the provincial assembly is the true representative of the K-P people including tribal areas.

“He said the number of casualties [in the so-called strike] was not known whereas the ISPR had frequently and regularly given figures of both terrorist casualties and also military and civilian casualties through press conferences, year ender, etc.,” he said.

Interestingly, the BBC had recently agreed to pay damages to Ukrainian President Petro Poroshenko over a report making allegations of corruption. The report specifically claimed that a €350,000 payment was made to secure a meeting with US President Donald Trump. Now the BBC accepted that the claim ‘was untrue’.

Timing of BBC fiasco is excellent for Poroshenko who filed the claim in last September, saying the allegation of ‘serious corruption’ had caused him ‘substantial distress and embarrassment’.

Reacting on the BBC recent report, Federal Minister for Human Rights Dr Shireen Mazari took to Twitter recalling an old meeting she witnessed between the British broadcaster and the previous government’s information minister held at the Pakistan Television (PTV) headquarters, in which BBC was insisting for matching “advertisement revenue to get balanced approach to reporting on Pakistan and India”.

I recall sitting in on a mtg in PTV HQs where the then govt info min was mtg BBC to see if they wld have a more balanced approach to reporting on Pak and India – and BBC made clear Pak would have to match ad revenues to get such an approach! https://t.co/TJwAg4Xnsi

PM Imran vows to uphold law in matter of judges