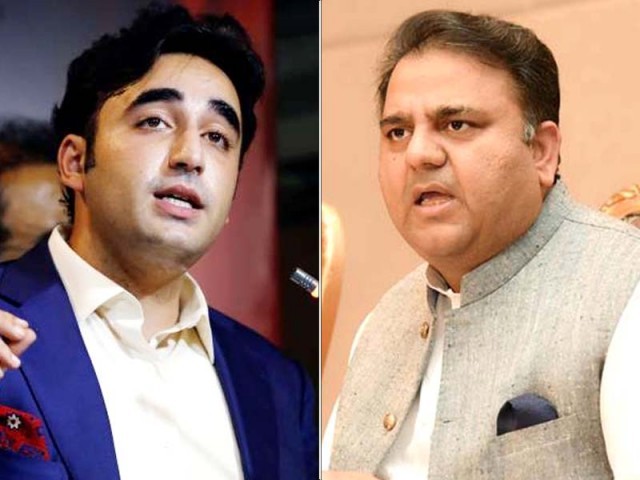 Don't play politics on the blood of martyrs, Fawad hits back at PPP chief. PHOTO: EXPRESS/FILE

Pakistan Peoples Party (PPP) chairman Bilawal Bhutto-Zardari and Science and Technology Minister Fawad Chaudhry engaged in a war of words on Twitter, hitting out at each other over the recent clash between Pashtun Tahafuz Movement (PTM) workers and army personnel at a check-post in North Waziristan.

On May 26, PTM lawmakers Mohsin Dawar and Ali Wazir led supporters, who according to security forces, assaulted a military check post to forcibly secure the release of a terrorists’ facilitator.

The attack had triggered a fire exchange which resulted in death of at least 10 people, while causing injuries to at least 15 others.

Both the lawmakers are under custody of the Counter Terrorism Department.

Bilawal, the scion of the Bhutto political dynasty, in reply to the federal minister said PTM leaders Dawar and Wazir were parliamentarians and terrorists.

He also hit out at Prime Minister Imran Khan, saying that the country’s premier had “called terrorists his brothers”.

The PPP chief added that he had always condemned terrorist attacks on the armed forces and continues to do so.

While your current leader called terrorists his brothers I was condemning terrorist attacks on our soldiers & still do today. Thats called consistency, something understandably alien to you. Dawar & Wazir are MNAs not terrorists. Asking speaker to follow rules… https://t.co/qKGIrAUA7F

The federal minister had drawn Bilawal into his line of fire by posting a video of his grandfather criticising Baloch separatists, saying: “I strongly recommend him [Bilawal] to hear this speech before committing his politics to the PTM and other so called nationalists”.

Historic speech of #ShaheedZulfiqarBhutto I strongly recommand @BBhuttoZardari to hear his Nana before committing his politics to PTM and other so called Nationalist https://t.co/URX0l9nLrL

Fawad claimed that Bilawal was playing politics on the blood of martyrs by condemning the martyrdom of a Pakistan soldier in a firing-and-blast attack in North Waziristan Saturday.

Bilawal, he said, did not speak out against the North Waziristan clash.

The PPP chairman said that he had only called for a commission to be formed to probe the incident to reveal the facts, adding that “we [PPP] want this for the supremacy of law and democracy and not to support any particular group”.

“Being a lawyer I’m sure you believe everyone is entitled to a fair trial and professional turncoats should really not talk about dual politics, ” Bilawal added.

… and calling for a commission is supporting facts, truth & democracy not any individual. Surely as a lawyer you believe everyone is entitled to a fair trial under Article 10A of the constitution? Professional turncoats should really not talk about ‘dual politics’.