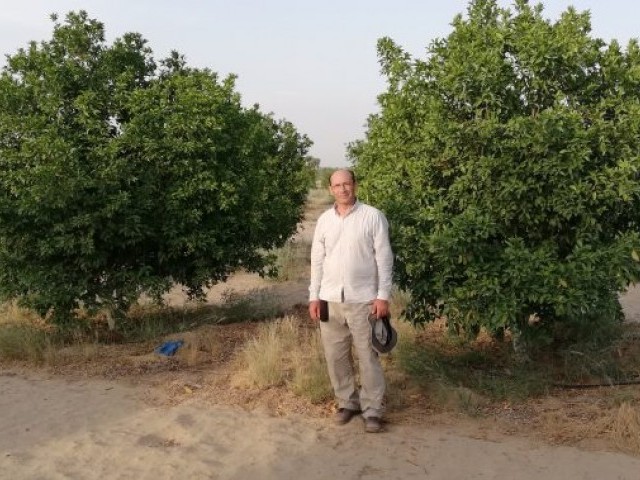 Hassan Abdullah has pioneered the use of drip irrigation on dunes in Punjab. PHOTO COURTESY: THE THIRD POLE

For as long as Hasan Abdullah can remember the 50-acre sandy dune on his 400-acre farmland in Sadiqabad, Punjab, was an irritant – nothing grew on it.

His farmland lies beside the vast Cholistan desert in a canal irrigated area east of the Indus River in Rahim Yar Khan district. Abdullah inherited it in 2005, when his father passed away. Until then he had been working in information technology.

In 2015, after much research, Abdullah took a “calculated risk” of cultivating the “barren” dune using the drip irrigation system. The government’s announcement of a 60% subsidy on drip irrigation was “a big incentive,” he said. Agriculture, through wasteful flood irrigation, accounts for over 80% water usage in a country facing severe water shortages.

Today, Abdullah’s dune is a sight to behold: fruit orchards have flourished in the sand. He admitted that without drip irrigation the “dune would never have produced anything.”

Water mixed with fertiliser is carried out through pipes with heads known as drippers, explained Abdullah, which release a certain amount of water per minute directly to the roots of each plant across the orchard. 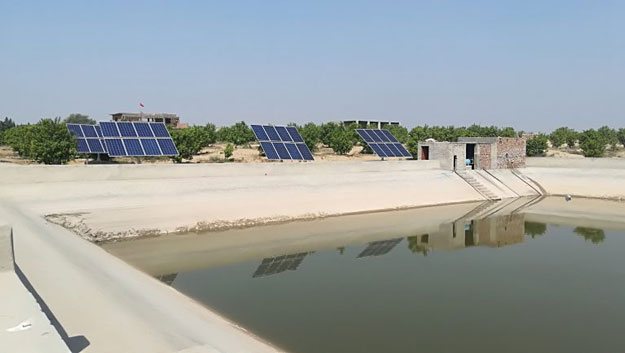 And because watering is precise, there is no evaporation, no run off, and no wastage.

These new water saving techniques will be key to the future survival of Pakistan’s farmers, who face growing water shortages.

Pakistan’s per capita water availability is very low, yet the agricultural sector is deeply inefficient in its water use and its productivity is low.

Farmers in Punjab grow water intensive crops such as cotton and wheat using flood irrigation. Their challenges will only grow with climate change. The water flow of the Indus River – which the farmers rely on for their water supply – is predicted with the rapid retreat of the Himalayan glaciers.

The power of the drip

Using drip irrigation, farmers can save up to 95% of water and reduce fertiliser use, compared to surface irrigation, according to Malik Mohammad Akram, director general of the On Farm Water Management (OFWM) wing in the Punjab government’s agriculture department.

In flood irrigation – the traditional method of agriculture in the region – a farmer uses 412,000 litres per acre, while using drip irrigation the same land can be irrigated with just 232,000 litres of water, he explained.

The water on Abdullah’s dune is pumped from a canal – which is part of the Indus Basin irrigation system – into a reservoir built on the land. “Being at the tail end [of the canal system], we needed to be assured the availability of water at all times and thus we had to construct a reservoir,” said Abdullah. For years now, farmers at the head of the canals have been “stealing” water causing much misery for farmers downstream.

But drip irrigation is expensive. Out of Abdullah’s 40 acres of orchards on drip irrigation, 30 acres are on sand dunes and ten acres are on land adjacent to the dune, locally known as “tibba” – a small sand dune surrounded by agricultural land. On the 30 acre-dune patch, Abdullah grows oranges on 18, feutral (another variety of orange) on another six acres, lemons on five acres and on one acre he has experimented with growing olives, which bore fruit this year.

In took three years of “micromanaging the orchards” before the orange and olive trees began fruiting last year. “We hope to break even this year and next year we should be in profit,” he said. It will take another four years to recoup all his investment, he calculated.

Abdullah was the first farmer to experiment with this new approach. Among many challenges that came his way was to get his farmhands to understand the new way of watering.

Akram has had a similar experience, “It is difficult for a traditional farmer to come to terms with it. Unless he sees the soaked soil with his eyes, he cannot believe the plant has been well watered.”

While Abdullah was saving water, the cost of diesel for running water pump was proving astronomical. Abdullah may not have been able to carry on farming with drip irrigation had the government not announced an 80% subsidy on solar power plants for farmers in 2018. He promptly took it up.

“Solar has been a life saver for us,” he said. Not only did the running costs decrease considerably, the solar system paid for itself in just one year, leaving only the costs of labour, fertilisers and chemicals.

Abdullah’s 40-acres are tended to by just four labourers, who not only look after the orchards and watering system, but manage the solar plant too. “If we were doing traditional farming, our costs would have been much higher. We would need a tractor, six to eight labourers and a lot more water,” he said

For his orchards, the drip irrigation runs for about seven hours every day. “If it were running on diesel, we would be consuming 35 litres of diesel a day at the cost of Rs4,270 (USD 30) per day,” Abdullah estimated.

Furthermore because it is precision watering to the roots, weed growth is minimal.

Since he set up his drip system, Abdullah has received a trail of visitors. A young farmer from neighbouring Bahawalpur who visited the dune in 2015 was so impressed he set up the drip irrigation over 700 acres of land he was looking after for an ex-army officer.

“Ours is the only farm in Pakistan that has set up a drip irrigation system over such a huge tract – and in the desert too,” said Asif Riaz Taj, who manages Infiniti Agro and Livestock Farm. Now in their fourth year, the orchards have started fruiting over 70 acres. But it will not be before its sixth year, Taj said, that they will “break even”. The drip irrigation and solar plant was installed at a cost of Rs25 million (USD 174,000), and the monthly running cost of this farm is almost PKR 4 million (USD 28,000).

Infiniti’s orchards get water from both groundwater using turbines as well as from the canal. “We have installed a 150 kilowatts solar plant for extracting water,” said Taj. The area is not completely sandy, such as the dune on Abdullah’s land, but it is still arid, and benefits hugely from drip irrigation.

Abdullah acknowledged that the drip system required a huge initial investment and warned that “unless one had strong financial backing”, it would be difficult.

“Our upfront cost was Rs3.5 million (USD 25,000), but our running costs [of farming on the dune and tibba] went up to Rs10 million (USD 70,621),” he explained. He was fortunate he had income coming from his other nearly 400 acres of land where he grows sugar cane, cotton and wheat.

Despite such a resounding success at Abdullah’s farm, saving on water and the attractive government subsidies, few farmers are taking to drip irrigation, said OFWM’s Akram. Nevertheless since 2012, his department has installed 50,000 systems on 5,000 sites (with an average size of 10 acres). It should have been much more.

“The mindset change from the farmers has been slow and despite all out efforts we have been unable to push this water-saving technology,” he admitted.

The installation costs are prohibitively high despite the 60% subsidy, Akram said. Farmers also say drip irrigation is not appropriate for all kinds of irrigation, particularly not for row farming like wheat, maize and rice.

Farmers complain that the agricultural department and the company don’t provide proper after sales services. The untrained and uneducated farmers have to find solutions themselves or are left to the mercy of the drip system vendor. Corroborating this, Abdullah said: “That is one of the biggest causes of failures.”

Akram vehemently denied this, saying that the both company selling the drip irrigation system and the agriculture department handhold farmers, training them to resolve glitches coming their way.

Abdullah, however, is among the converts. He plans to expand the drip irrigation further for olives and mango orchards once profits are up.

The article first appeared on The Third Pole