A black glacie­r is bulldo­zing its way down a valley in Hunza, threat­ening to cut off a vital road link to China
By Reuters
Published: May 30, 2019
Tweet Email 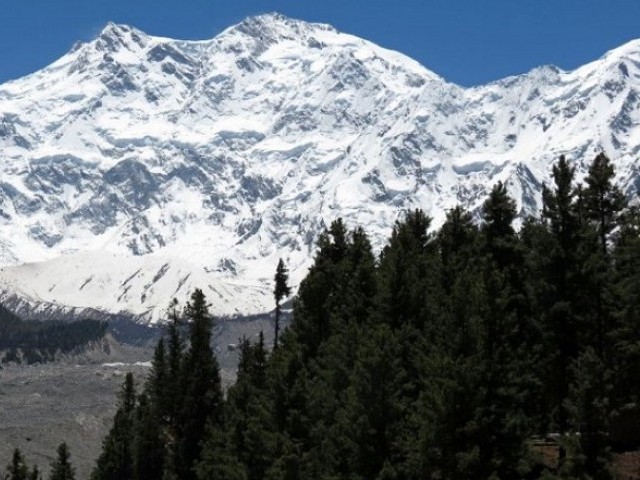 A black glacier is bulldozing its way down a valley in Hunza, threatening to cut off a vital road link to China. PHOTO: AFP

HUNZA: A menacing black glacier is bulldozing its way down a valley in northern Pakistan, threatening to cut off a vital road link to China and blocking melt-water that could flood villages below.

Up close, the surging wall of ice almost 200 metres (656 ft) high, above Hassanabad village in Hunza district, cracked and groaned in the May sun as ice and debris fell off in big chunks.

The glacier has been advancing since last July, according to Faheem Baig, a shepherd from the village next to the Karakoram Highway (KKH), 4 km (2.5 miles) downstream of the glacier mouth.

“I went off with my yaks to the summer pasture far up above the glacier in May, and when I came back to get some supplies in October, the valley was completely blocked by this glacier,” he said.

“The trail on the mountainside was gone and with great difficulty, I made it back over the mountain-top. I had to leave my livestock behind. I couldn’t believe it had moved so fast.”

Shehzad Baig, assistant director of the Gilgit-Baltistan Disaster Management Authority, said the Shishper glacier was on the move partly because it was located on the main Karakoram thrust line where tectonic plates are shifting.

In addition, deposits of snow on the glacier have increased due to larger amounts of snowfall in the winter months over the past five years linked to climate change, he said.

A February report on the Hindu-Kush-Himalayan region from the International Centre for Integrated Mountain Development (ICIMOD) said the Karakoram and western Himalaya areas were seeing more variability and a higher probability of snowfall.

But Philippus Wester from the Nepal-based ICIMOD, who led the study, said that while some glaciers in Pakistan are stable and a few are even gaining ice, they will nonetheless all start to melt in time as the planet heats up.

The report warned that more than a third of the ice in the region would melt by 2100 even if governments took tough action to limit global warming under the 2015 Paris climate agreement.

“At this rate, it will take around two years to reach the KKH – but we are hopeful that it will stop surging,” said Sahib Din.

To the left of Shishper is another glacier, Muchowar, which was once parallel but retreated four km from 2006 to 2017, possibly sparked by rock falls linked to local mining activity.

Shishper’s surge ahead means the water coming out of Muchowar as it melts in the summer cannot run down the ravine’s streams and has formed a lake in the Muchowar Valley.

A month ago, there was a danger that glacial lake would burst, causing floods below. But Sahib Din said the risk had passed as crevices had opened in Shishper with May’s rising temperatures, enabling water to pass through into the stream.

However, there are 72 houses downstream that are at risk from sudden flooding in case bigger crevices open and the water starts flowing faster.

Villagers have been told where to evacuate, and Sahib Din has set up a control room to monitor the situation.

An early warning system for glacial lake outburst floods (GLOFs) would be invaluable, he and other experts said.

The Green Climate Fund, set up to help developing countries tackle climate change, has granted $37 million to a project to reduce the risks of such floods in northern Pakistan.

Its technical advisor, Abduvakkos Abdurahmanov, who works for the United Nations Development Programme (UNDP) in Pakistan, has visited Shishper glacier and believes the work is urgent.

After a bureaucratic delay of over a year as Imran Khan’s government settled into office, the project is finally being implemented.

Sixteen valleys with threatening glaciers will be selected in the Gilgit-Baltistan region and eight in Khyber Pakhtunkhwa’s mountainous districts after analysis of local vulnerabilities. Abdurahmanov said the government, the UNDP’s partner on the project, had requested work be speeded up to install equipment like sensors to monitor water discharge and glacier movement.

Satellite imagery and drone mapping, meanwhile, will be used to set up early warning systems, he said.

Muhammad Atif, deputy director of the Pakistan Meteorological Department, noted the complexity of glacier-linked dynamics – sometimes a GLOF can be triggered by torrential rains, or a “dry flood” can occur when a lake bursts due to a temperature spike.

Mohammed Ibrahim Khan, UNDP manager for the GLOF project, said lessons had been learned from an earlier pilot project in two mountainous valleys in Chitral and Gilgit ago, financed by the UN Adaptation Fund.

They included the need for better coordination among different government departments and agencies, he said.

Besides GLOFs, the new project will address flash floods, another big problem in these mountainous areas, he added.

Other interventions include building flood prevention structures like gabion walls and stabilising slopes by planting shrubs with deep roots and fast-growing trees such as poplars.

Khan Baig, who lives below Shishper glacier in Hassanabad, knows about its recent movement.

“But I’m hearing all sorts of stories – some say it will stop, others say it will come and destroy our homes and the KKH. I just don’t know,” he shrugged.

His family will move if the worst happens, but that prospect remains a good two years off, he believes.

Residents of Aliabad, one of Hunza’s main towns further up the KKH, are more concerned as their water supply could be cut off in less than a month by the glacier’s advance.

Below is a wooden bridge carrying a large water pipe, which transports water from streams above the glacier to Aliabad.

“This bridge will be eaten up by the surging glacier in 20 days’ time,” said farmer Arman Ali. Every day, he checks how far the glacier has come and worries about the pipe being destroyed.

“Water scarcity is a big issue for us,” he said, adding that local farmers had made irrigation channels for their fields at great cost to themselves.

“Then the glacier just eats them up. Our crops are suffering. But who can confront a glacier? It has a will of its own,” he lamented.