Captai­n seems to alread­y have won the hearts of many prior to the team's first match
By Entertainment Desk
Published: May 30, 2019
Tweet Email 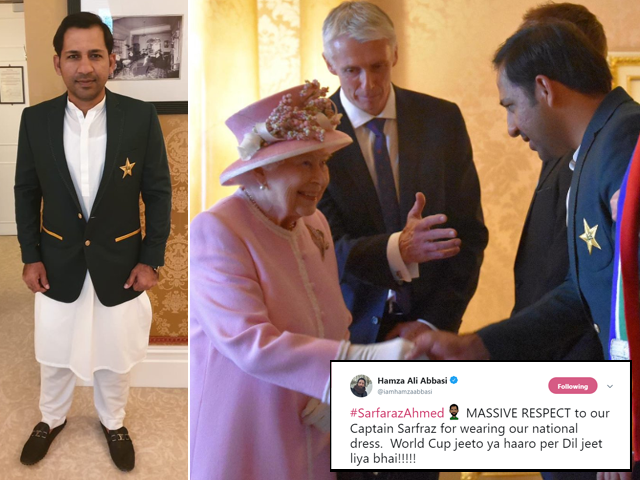 Sarfaraz Ahmed, Pakistan cricket team’s captain, met Britain’s Queen Elizabeth II and Prince Harry, Duke of Sussex, along with other skippers ahead of World Cup 2019 opening party at The Mall, in front of Buckingham Palace in central London, on Wednesday.

The captain, Ahmed, clad in a crisp white shalwar kameez and a dark green blazer represented Pakistan with its national dress and we laud him for it!

Those people who are making fun of his English should understand that it is just a language.
Moreover, they are the reason why I still believe that Angraiz to chly gye peechy GHULAM chor gye.#SarfarazAhmed looking amazing in the dress. Best of luck for the #ICCWorldCup2019 pic.twitter.com/G7lu5233IS

This makes my day, what a worth seeing moment. Nations build up due to following own Culture. We will change together Insha Allah.#SarfarazAhmed pic.twitter.com/cSyrY1TLph

I don't understand why ppl criticizing #SarfarazAhmed for wearing shalwar kameez in #CWC19 ceremony, rather it reminded me of the great #DrSalam who wore his traditional dress while receiving the first #NobelPrize for #Pakistani. One should be proud of one's cultural heritage! pic.twitter.com/F20VBKyded

Trust me whatever you do, there'll be people who will still criticize you. Follow your heart. Just know that y'all don't need everyone's approval to be happy.
We are super proud of you #SarfarazAhmed
Make us more proud by winning that cup! ❤️ pic.twitter.com/35ohNf6CcS

People are criticizing #SarfarazAhmed for not wearing suit and tie. We all should be proud of him representing our Culture, our National attire on such big occasion for him and his country. ❤ #KeepItOriginal pic.twitter.com/CDNkt2t84s

Only cricketer with his National dress, we all Pakistan nation salute you #SarfarazAhmed pic.twitter.com/IQotGrhLq8