Farmer­s say Manker­a’s fruits are famous for their colour, sweetn­ess and taste
By Rana Aamir Aslam
Published: May 28, 2019
Tweet Email 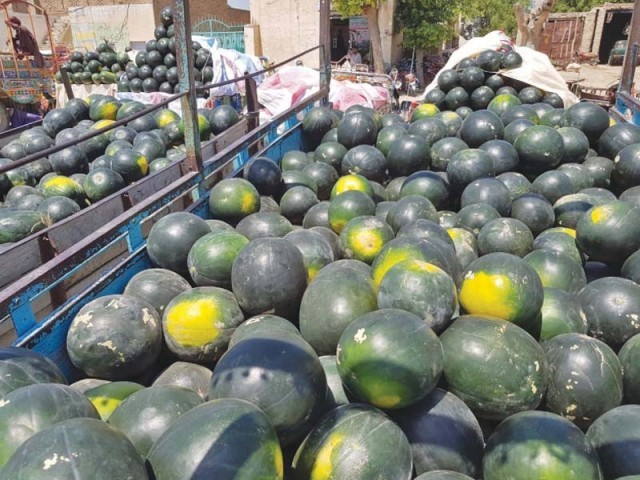 BHAKKAR: Melons and watermelons, cultivated on thousands of acres in Mankera tehsil, are known for their colour, sweetness and unique taste. The process of cultivating these fruits is at its peak during this time of the year.

Speaking to The Express Tribune, farmers Asad Abbas and Saghir Asghar stated that if given support from the government, a handsome amount of foreign exchange can be raked in by exporting the melons. The number of melons and watermelons produced in Mankera is greater than any other part of Sindh, they said.

The seeds for melons and watermelons are sown at the beginning of March. The crops take approximately two-and-a-half months before they yield fruit. After the fruit is harvested, local farmers transport it to local markets where it is sold.

Agriculture experts said that Mankera tehsil is the only area in the Thal desert where water can be used for both rearing animals and cultivating crops. The water is what contributes to the taste and nutritional value of the fruit, they added.

‘Fruit for all’ drive comes to Peshawar

In addition, the desert soil contains a lot of nutrients and minerals which help the cultivation of all sorts of crops, they explained.

Presently, the fruits cultivated in Mankera are being sold in markets across Karachi, Peshawar, Lahore and Rawalpindi. During this time, businessmen from across the province flock to markets to buy the sweet summer fruit in bulk. These businessmen buy melons and watermelons from the tehsil and supply them to their local markets, earning a profit in the process.

Arid Zone Research Institute Director Dr Khalid Hussain said that this year’s production of melons and watermelons is lower as compared to the previous year. The main reason for this fall is intermittent rains, he explained. The best thing about growing melons and watermelons is that farmers are able to get quick cash. However, those growing fruit in Thal desert face a lot of difficulty due to a lack of modern technology and transportation, he stated. In addition to this, a large portion of the crop is wasted, he added.

He maintained that approximately 1,500 crates of fruit can be produced from one-square acre while the weight of each crate is around 15 kilogrammes. The ideal temperature for such crops is 20 degrees Celsius, he said.

These seasonal fruits, which are liked by most because of their natural sweetness, also have many health benefits. Pakistan Medical Association Bhakkar President Dr Malik Khalid Javed said that watermelons are very beneficial for human health.

Eating these fruits can prevent dehydration and prevent heat strokes during the summer months, he said. Further, the fruits are extremely beneficial to those suffering from constipation and other intestinal issues. Citizens should take care to include the fruit in their daily diet, he said.

Youm-e-Ali procession concludes with call for unity of Ummah