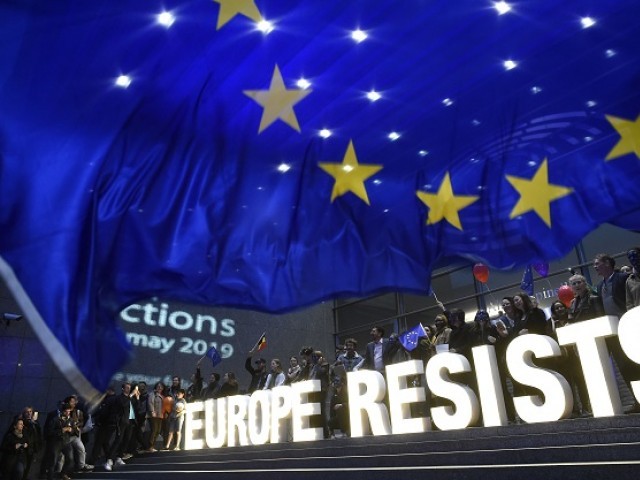 Turnout EU-wide was estimated at 51 percent, the highest in 20 years, suggesting more than 200 million citizens across the 28-nation bloc voted in a poll billed as a battle between populists and pro-European forces. PHOTO: AFP

BRUSSELS: Europe’s mainstream political parties took a hit in elections on Sunday but held off a strong surge by the populist right of Marine Le Pen, Matteo Salvini and Nigel Farage.

In one of the world’s biggest democratic votes, the main centre-right and centre-left groups lost their combined majority in the European Parliament in the face of a challenge by Eurosceptic and nationalist forces.

In Britain, Farage’s one issue Brexit Party appeared to have trounced the main parties and he will send a large contingent of British eurosceptics to a parliament they want to leave in a few months.

And in Italy, Salvini’s far-right League achieved a similar result, strengthening its role at the core of a vocal populist faction in the EU’s legislature.

The advance of the right was less pronounced in Germany — where a strong showing by the Greens was reflected in a “green wave” in many countries — but the anti-immigrant AfD broke the 10 percent barrier.

Turnout EU-wide was estimated at 51 percent, the highest in 20 years, suggesting more than 200 million citizens across the 28-nation bloc voted in a poll billed as a battle between populists and pro-European forces.

Across Europe, according to a projection prepared by the parliament, the EPP is on course to have the most seats in the assembly with 180, down sharply from 216 in 2014.

With the centre-left Socialists and Democrats (S&D) projected to win 152, down from 185, the two mainstream parties will no longer have a majority and will have to reach out to liberals to maintain a “cordon sanitaire” and exclude the far-right from decision making.

The various populist, Eurosceptic and right-wing parties won more than 150 seats, but form no coherent coalition.

The Europe of Nations and Freedom — composed mainly of the French National Rally and Salvini’s League — saw their share rise from 37 to 55 seats.

Salvini tweeted a photo of himself with a sign saying “top party in Italy” while standing in front of a bookshelf featuring a Make America Great Again baseball cap and a picture of Vladimir Putin.

The Europe for Freedom and Direct Democracy — which includes the Britain’s Brexit Party — went from 42 seats to 53.

“It looks like it’s going to be a big win for the Brexit Party,” Farage said, after an election held against a backdrop of disarray including the resignation of Prime Minister Theresa May and the postponement of Britain’s EU exit.

Each previous EU election since the first in 1979 has seen turnout fall, but turnout figures from across the 28-nation bloc were up, suggesting this year’s culture clash has mobilised both populists and those who oppose them.

In Belgium the far-right Flemish separatist Vlaams Belang was on course to triple its previous score.

And in Finland, the far-fight Finns Party increased its vote share and retained its two EU seats. The Sweden Democrats were on course to increase their share from 9.67 to 16.9 percent.

Dutch anti-Islam leader Geert Wilders was however set to lose all his Freedom Party’s seats, although there was a strong showing by upstart populist Thierry Baudet.

In his home country of Poland, European Council chief Donald Tusk expressed confidence that voters would not succumb to “radical political movements” but admitted that the priority was to “save the EU as a project.”

In France, Macron had taken it upon himself to act as figurehead for the centrist and liberal parties, and Le Pen took up the 41-year-old’s challenge.

“It is up to the president of the republic to draw conclusions, he who put his presidential credit on the line in this vote in making it a referendum on his policies and even his personality,” Le Pen said.

An aide to Macron however said the result was “respectable”, with exit polls showing his centrist alliance on 22.5-23.0 percent, just behind Le Pen’s 24-24.2 percent.

Another nationalist party, the Fidesz of Hungary’s Prime Minister Viktor Orban, was on course for a massive 56 percent victory, according to a poll conducted Sunday.

The mainstream parties are vying between themselves for influence over the choice of a new generation of top EU officials, including Tusk and Juncker’s replacements.

EU leaders have been invited to a summit on Tuesday to decide how to choose the nominee. The EPP is insisting on Weber for the Commission, but Macron and some others want a higher-profile candidate.