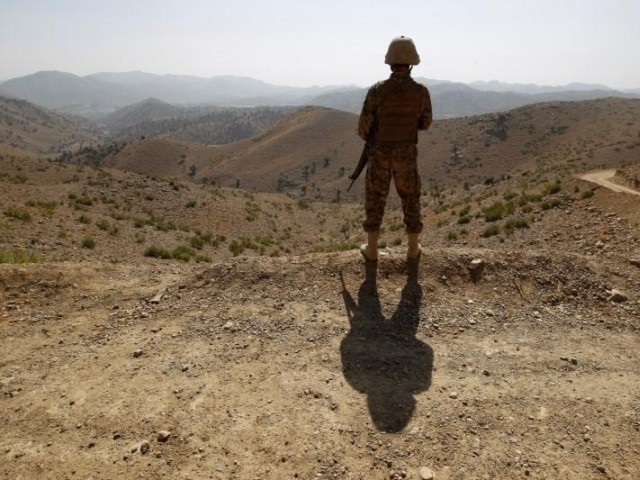 A soldier stands guard outside the Kitton outpost along the border fence on the border with Afghanistan in North Waziristan, Pakistan October 18, 2017. PHOTO: REUTERS

The terrorists raided the check post in the Shawal Valley of the north-western tribal district. “Troops effectively repulsed [the] attempt,” added the military’s media wing. “In exchange of fire, a soldier of the Pakistan army embraced Shahadat.”

Separately, an army patrol recovered five bullet-ridden bodies from a nullah approximately 1.5 kilometres away from the Khar Kamar Post. “The identification of the dead bodies in process,” the ISPR said.

The military says it is the same area, Boya in North Waziristan, where a clash had occurred between security officials and protesters led by lawmakers Mohsin Javed Dawar and Ali Wazir.

“They wanted to exert pressure for release of suspected terrorists’ facilitator arrested the other day,” the army said of the Sunday clash. Five soldiers and 10 civilians were injured while three civilians were killed in the check post assault.

MNA Ali Wazir and eight others were arrested.

Situation in the region remained on high alert following the attack on the military check post.

According to a health department notification, an emergency has been declared in hospitals, while leaves of health officials have been suspended.

In the wake of the current security situation, all health official workers have been directed to remain on their respective duty points, the notification went on to add.